Nigerian International, Emenike and his ex beauty queen wife, Iheoma look unperturbed in new video shared on social media after BBNaija housemate, Mercy accused him of dating her just before he went on to marry his wife.

BBNaija housemate, Mercy has revealed that she was in a relationship with ex Super Eagles International, Emmanuel Emenike when she found out he was getting married on social media. 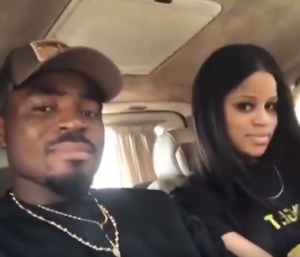 Mercy opened up to Elozonam about her past failed relationships, she revealed to him that she had dated a footballer, Emenike which she later found out he was getting married via social media and he blocked her on all platforms.

After she made this comment, fans of the show headed on to Emenike’s social media page to drop comments questioning him and accusing him of breaking Mercy’s heart.

Some even predicted there would be chaos going on in Emenike’s home now following the news from Mercy but he has now put this rumour to rest by sharing a video of himself and his wife enjoying a ride and undisturbed as they laugh together.