by San O.
in Love and Relationship

Anything passes for clout in the Nigerian Twitter space. A beautiful Nigerian lady simply identified as @dejokecarew on Twitter has called out her ex boyfriend whom she treated so well with her culinary skills by making Peppersoup, peppered meat (Asun) and stew out of one goat. In a post she made on Twitter she said:

“Our wife.” “Wife material” “She’s not like some people (his ex) “ Me too I was blushing. From one goat, I made Pepper soup, Stew & Peppered meat for over 10 people.

Anyways he’s married to that his ex now. 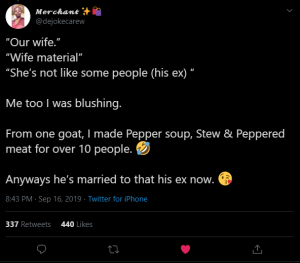 The will be quite hilarious if it was a joke but if it is not, we wish her well and hope she finds a man that will value her for who she is.
Prev postNext post
Use your ← → (arrow) keys to browse
Tags: entertainmentNigerian LadyRelationshipTwitter
Share578Tweet8Pin3SendShare

Lady buys a car for her boyfriend after saving N10,000 per week for 2 years (Photos)