Thunder has allegedly killed about 36 cows in a community in Ondo state, making the herdsmen take to their heels. According to reports, herdsmen at the mountain top of Ijare community in Ifedore Local Government Area of Ondo State fleed after about 36 cows they allow gaze without permission from the community leader were struck dead by thunder.

This is said to have happened on September 21 and confirmed by a community source who said the Fulani herdsmen incurred the wrath of their gods by desecrating the sacred groove which is forbidden in the town.

Man defends the killings by herdsmen, says more humans should be murdered to equate the amount of cows killed 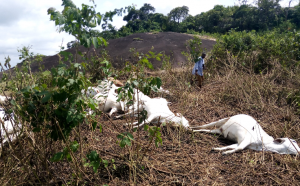 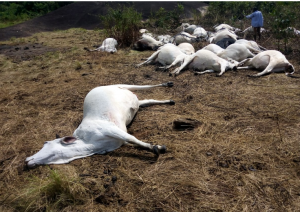 According to Ifa priest, Chief Adebola Adetimehin, the oluwo Ifa of Ijebuland in Ijebu-Ode, Ogun state, himself and their traditionalists in Ijebuland would no longer sit back and watch while suspected Fulani herdsmen continue the killings and kidnapping which has become unbearable in the Ijebu axis of Ogun state.

He had told all Ijebu indigenes to fortify themselves with charms to prevent being killed like chickens by herdsmen or bandits.