Wizkid is a Legend – Davido replies to follower

Wizkid is a Legend – Davido replies to follower

Nigerian singer Davido while responding to a follower who got him slightly angry on twitter, has mentioned that Wizkid is a legend. It all began when the singer took to his platform to reveal that he co-wrote one of the songs in his coming album with Adekunle Gold. This of course didn’t sit well with some twitter users who blasted him for not writing his songs.

A certain user had, in his response, mentioned that the singer only came out with the truth only because one of his trending songs in time past, Gobe was reported not to be written by him.

He said if not for that, he wouldn’t have revealed that Adekunle Gold wrote a song with him. 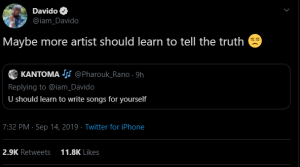 Then in his response, Davido mentioned that FC people are really pissed today. 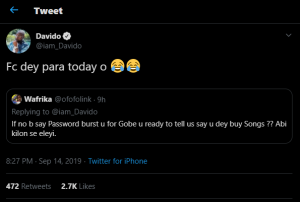 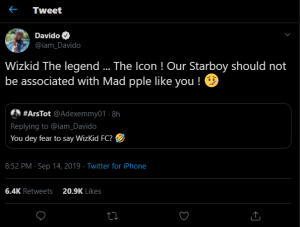 That was when the recently engaged singer flared up saying Wizkid is a legend and that the Starboy he knows would not be associating with mad people like the guy.