by San
in Entertainment, Lifestyle 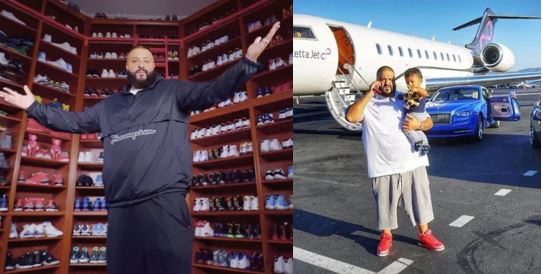 DJ Khaled is one of the most popular producers and DJs in the world. He has worked with several famous names such as Rihanna, Drake, Justine Bieber and many others. His most recent album Father of Asahd has seven songs on American Billboard Hot 100.

The singer is not only successful in music and he has an entrepreneur spirit. DJ Khaled has restaurants, many properties, a publishing company and other investments. He has a US$ 35 million fortune and he doesn’t hold back when he wants to spend it. The musician also enjoys sharing his lavish lifestyle on social media, where we are in use to see his fancy cars, clothes and other luxury items.

Who doesn’t love cars? But not all of us can afford a millionaire collection as DJ Khaled. The musician is a proud owner of a handful of Rolls-Royces that he is always showing off. He used a Rolls Royce Phantom, one of the most expensive in his collection, in one of his video clips in 2011.

In 2011 he also bought a luxurious tour bus, with leather seats, a bedroom, a bathroom with black marble and fully equipped kitchen. It would be a great experience to take a tour around U.S. on that bus, right?

Having a lavish mansion is one of the first items you should buy when you are a celebrity. And DJ Khaled would not be different. Last year he put his house on the market for US$ 8 million, what is an insane price for most of us, but nothing compared to the US$ 25.9 million waterfront house he bought in Miami.

The place has an 80 foot-long swimming pool, five bedrooms and a guest house on the other side of the property, with four bedrooms.

Unsurprisingly, this is not the only property of the musician, who also owns other luxurious properties.

Prev post1 of 4Next
Use your ← → (arrow) keys to browse
Tags: DJ Khalidentertainmentlifestylephotos
Share153Tweet8Pin3SendShare