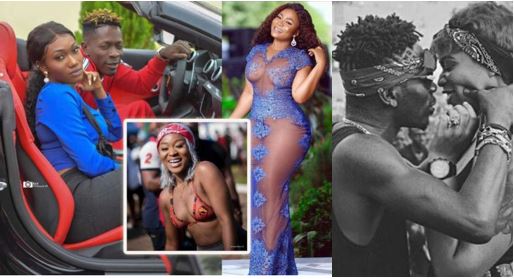 It is no secret that popular Ghanaian singer, Shatta Wale is a lover boy. The award-winning Dancehall artist himself has confessed on several platforms that he loves women and women love him back. Already it is public knowledge that Shatta Wale has 3 children with 3 different women. Interestingly, he is not in a relationship with any of the 3 women as at now.

We have many Nigerian artists we can liking to Shatta Wale’s obsession for women. In the more contemporary times, We have Wizkid, 2face and maybe Davido until he met his “assurance”, Chioma Avril Rowland and also in backdated times we had the almighty Fela who myth had it that he married 27 women in one marriage ceremony.

We have compiled the full list of female celebrities who have allegedly dated Shatta Wale at some point.

On top of the list is Michelle Diamond, the baby mama of Shatta Wale. Shatta Michy who is a famous musician herself and the hitmaker of “Low Tempo” featuring Shatta Wale is the mother of Majesty, Shatta Wale’s third child.

Michy and Shatta Wale were the most famous celebrity couple in Ghana. They were like the Ghana version of Jay Z and Beyonce. Sadly, the two had one of the dirtiest celebrity fights on social media.

Whiles Shatta Wale accused of Michy of doing drugs and partying everyday day, Shatta Michy accused Shatta Wale of assault. They patched up late last year and Shatta Wale even publicly proposed marriage to her but they ended up breaking up again.

Efia Odo and Shatta Wale’s alleged affair started almost 3 years ago when Shatta Wale was still dating Shatta Michy. It began when a photo of Shatta Wale and Efia Odo in bed in the USA surfaced on social media.

Whiles Efia Odo later claimed she was a family friend of Shatta Wale and Michy, Michy came out and denied knowing who she was or even knowing her.

Fast forward after Shatta Wale and Michy broke up, Efia Odo took center stage in Shatta Wale’s life. Both have neither confirmed or deny the rumors but Shatta Wale has confessed he would love to marry Efia Odo.

Kisa Gbekle, the Ghanain socialite has a fling with Shatta Wale when Michy walked out of the relationship.

On many occasions, Shatta Wale and Kisa Gbekle confessed their love for each other on social media. But their affair was short-lived. I guess Shatta Wale got bored.

When Sista Afia returned from the UK and expressed her interest in music, she allegedly dated Shatta Wale for some time.

According to social media gossip, Sista Afia slept with Shatta Wale before he featured in her hit song “Jeje”. Both artists have denied the allegation.

In June 2018, social media users in Ghana woke up to the viral news that Shatta Wale was bonking the South African socialite and Instagram Model, Ndlovu.

Shatta Wale was at the time in South Africa shooting a music video. It got to a point Ndlovu was following only Shatta Wale on Instagram. But they allegedly ended the affair some couple of months later

She was even referring to herself as the new queen of the Shatta Movement Family. But, the movement did not accept her for several reasons and Shatta Wale had no choice but to jilt her. She has since ceased associating with Shatta Wale

On of the make, girls made it slip that Shatta Wale slept with Moesha Boduong paid some small disrespectful amount of money to Moesha

But because Shatta Wale is a superstar, she had to take it like that compensate her soul with the fact that Shatta Wale has bonk her.

It appears that Michy and Shatta Wale’s breakup was a good omen for some Ghanaian female celebrities. It paved the way for some people to try their luck with the Dancehall King.

Wendy Shay and Shatta Wale’s affair has not been secret, just like Efia Odo, Shatta Wale has confessed she loves Wendy Shay and would love to marry her if the chance avails its self. Wendy has not denied the affair either.

Charging my phone, landed me in prison, says suspect