BBNaija: Guess who is back home? – Khafi excited as she leaves Nigeria for London (Photos) 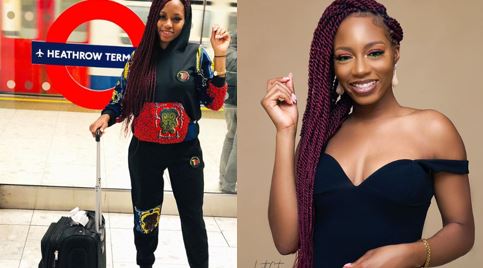 Reality TV Star, Khafi Kareem has just traveled back to the United Kingdom after spending about 5months in the country.

The Nigerian-British police officer, took to her Instagram to make the announcement. In a photo of her standing at the Heathrow International Airport, London, Khafi disclosed that she would be hosting a few fans to a meet and greet later tonight. In her words:

Guess who’s back like she never left 😁 💁🏾‍♀️ After a 6 hour flight it’s now a different kind of homecoming 😉 Swipe for details of my meet and greet in London 7-9pm TONIGHT! 💃🏾✨ Oh and I will be going live at 8pm so everyone can join us😉 #acupofkhafi #Khafinators unite!!! #London Tracksuit: @tribalwestlagos Khafi who has been on media tour ever since she left the house visited the first lady at her office in the Government House, Ado Ekiti. Read More