BBNaija Pepper Dem edition is arguably the best Big Brother Naija ever. The show had a very slow start but things began to plummet when Biggie decided to bring in real housemates weeks after the show begun. In times past, housemates who come in later on in the show are often regarded as fake housemates. Last night was the last BBNaija Saturday Night party for this season and it was deservingly a party full of grandeur, witty moments, nostalgic feelings and of course pettiness of different kinds. 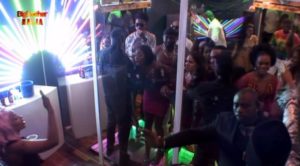 The Saturday Night party was the penultimate day the to BBNaijaFinale and we all can’t wait to see the drama that will unfold tonight.

See all that happened at the party of the year below

Evicted housemates were invited into the house to party with the top 5 that includes: Mike, Mercy, Frodd, Seyi and Omashola. 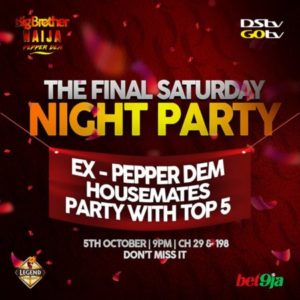 Khafi was the most notable amongst the former housemates invited into the house as she was really enjoying herself by getting lost in her dance moves. See photos below 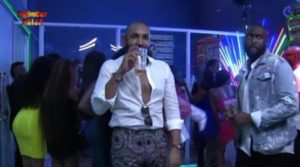 2. Tuoyo’s “I must blow by force’ clouts chasing

The evicted housemates are partying with the Finalists tonight for the final Saturday’s party. 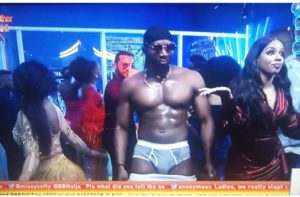 The BBNaija fans were divided over this as some were having it while others felt Tuoyo had it premeditated just to get everyone talking about him, well he got the attention he got for

Mercy being the last female amongst four male housmates in the BBNaija finals, sure gave us a run for our money last night. She was a wild party beast last night and more than enought to take on Mike, Seyi, Frodd and Omashola as they were all taking turns hitting the dancefloor with her. 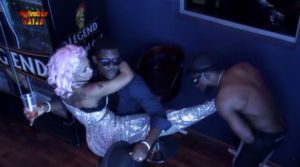 Don’t be in a hurry, we will still discuss her ‘ship’ with Mike that had a late takeoff last night.

Mercy threw caution in the air as she was seen frolicking with other male housemates knowing full well of Ike’s presence. The Disc Jockey last night, DJ Obi was nothing but explosive with his line of songs setting the dance floor ablaze. He played the popular ‘Chiwawa’ song that was birthed from Mercy and Tacha’s many fights. Mercy had an extra gear on when the song began to play. Watch video below:

These two had a little too much to drink last night as they started another show right after the party ended. Fans of both parties talked about the ‘sibling’ love Mike and Mercy had for themselves..They were seen screeching at the top of their voices in very close angle that could have sparked a kiss controversy. Many were praying the duo won’t take the alcohol’s influence a little further than they should. See videos from their moment below:

Tuoyo doing what he does best, stripping.

I’m sure you were waiting for us to talk about Tacha’s absence, well, if you read the content well, you would notice she wasn’t in any of it. That’s noteworthy of mentioning.
Prev postNext post
Use your ← → (arrow) keys to browse
Tags: BBNaija 2019entertainmentFroddMercyMikeOmasholaSeyiTacha
Share149Tweet8Pin3SendShare

Tacha parades her hot thighs in front of her new Mercedes