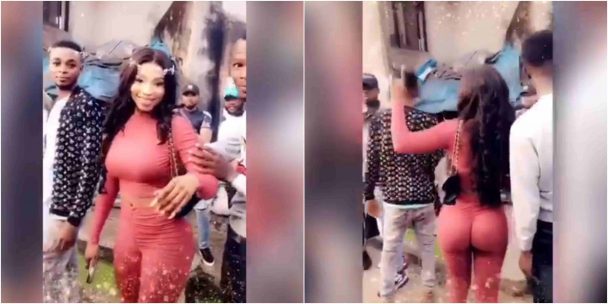 Big Brother Naija, BBNaija housemate and finalist Mercy is the only lady standing at the ‘Pepper Dem’ of the show and her audition video has just hit the internet.

The housemate who auditioned in Owerri has been one of the highlights of the current reality TV show, especially with her voluminous backside which surely endears her to the hearts of most the viewers of the show.

Even at the onset of the show in July, Mercy revealed that she is certain she will emerge the winner of the show and she believed her body and her face would do the trick

The things that will make me win, I think should be my body and my face. The 2019 winner looks like me, Mercy Eke, your girl.” she had said

Mercy is curvaceous and she readily flaunt her body when given the opportunity. In her stay in the Big Brother Naija house, housemates and audience have been treated to a good view of her sexiness.

Mercy admits her weirdest pleasure are her titties while revealing that the craziest thing she’s ever done and gotten away with was when she kissed her crush to win a game.

However, she has had her heart broken but the most painful heart was when her ex asked her best friend out.

Lady strips on Facebook Live to curse her ex-boyfriend (Video)