BBNaija: “Tacha’s Fans will ruin her because they keep lying to her” – Toyin Lawani blows hot (Video)

Popular stylist, Toyin Lawani has blasted fans of controversial reality TV star, Tacha for heaping insults on her after she made a skit mocking Tacha.

The mother of two posited that Tacha’s fans popularly known as Titans are making mountains out of molehills.

Lawani had earlier shared a video in which she posed as Tacha playfully calling out Jaruma for not giving her the 50 million she had promised her and she got a lot of backlash from the video.

After taking down the video, the fashion designer shared a new video with the caption:

“Tacha fans are D major problems she has,,u people are mad for insulting me

Like seriously , STOP CREATING ENMITY WHERE THERES NONE 😡😡😡 me I’m not @jaruma_empire o ,ma shepe funyin ni, can’t believe that the video we made now just mocking around with ourselves , you said I was shading her, when it’s truly Jaruma I was playing with, abikofedafunyin , Emiomagbadun o, 😡I will drag your destiny if you try this shit with me, Go and tell the person with the bad attitude that you are worshipping the truth and get the fuck off my comment section, hv u heard me say anything bad about this girl before ?, even upon all her nasty unbearable attitude in the house, always looking down on her fellow house mateS, I didn’t say nothing cause I didn’t want to hurt my friend ,but the truth is bitter , how do you want someone to change ,when You can’t even speak the truth, I didn’t even agree with most things Jaruma did for the girl ,but she stood strong behind her , why can’t you appreciate that , have u seen any video of her thanking Jaruma ? Or saying anything about her, common this is bullshit, that people don’t talk don’t mean they are fools, we all have our own problems too ,that we decide to help people don’t mean we don’t have people on our necks who are dying for this help,May we not help any ungrateful soul in our lives o, next big brother @jaruma_empire make we put our family help them for there. TO EVERYONE SAYING SHE THANK HER ,MAY THEY NOT TAG U ON A LONG LIST AS APRECIATION WHEN U DID THE MOST , FUCKING BS🔥🔥🔥🔥🔥🔥 LATER U WILL SAY THEY WANT TO USE HER TO TREND LIKE WE WERENT TRENDING BEFORE THEY CAME TO LIGHT HISS OR HV U HEARD ME SAY ANY SHIT ABOUT HER BEFORE ,AWON ATOLE 🔥🔥GBAM THE SERIAL ENTREPRENEUR HAS SPOKEN ,NOW RUN ALONG AND BLOG FAKE NEWS AS USUAL , FUCKING ASSHOLES…CANT EVEN STAND THE PRIDE -FUCKING LOSERS ALWAYS SAYING RUBBISH ABOUT PEOPLE THEY KNOW NOTHING ABOUT. SEE HUMILITY IS KEY, NO MATTER THE LEVEL OF SUCCESS YOU ATTAIN YOU NEED IT #KINGOFALLQUEENS” 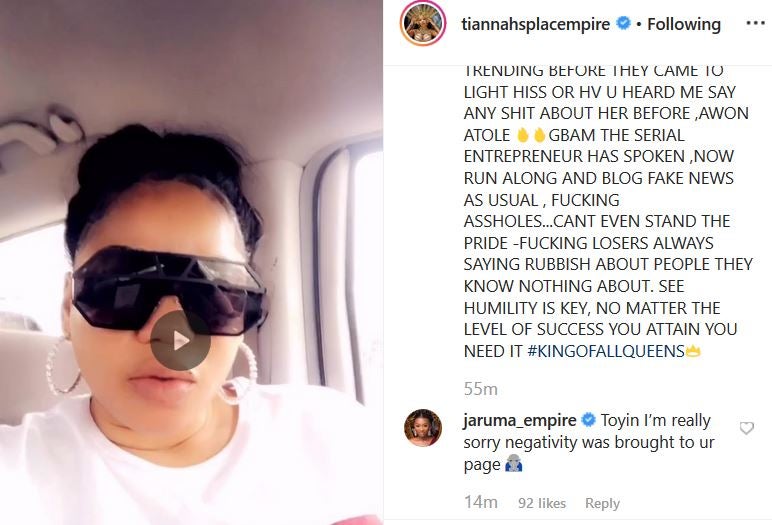