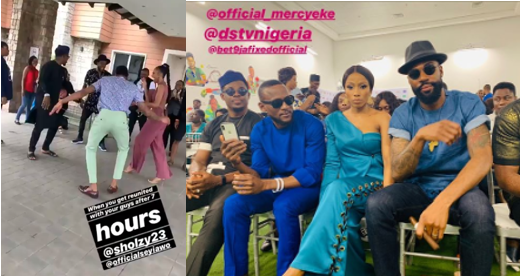 Big Brother Naija Top 5 finalist, Mercy, Mike, Frodd, Omashola, Seyi and other BBNaija housemates as they gather to get their prizes today. Mercy being the winner for this year’s edition will be going home with cash prize of N30m, SUV from Nigerian automaker, Innoson Motors. Other prizes are trip to Dubai; a home make-over: a year’s supply of Pepsi and One Africa Fest VVIP experience; a year’s supply of Indomie noodles & Munch it; a brand new Oppo mobile smartphone. There’s also a bonus prize of two VIP Tickets to watch a European Football final game LIVE, courtesy BET9ja. BBNaija first runner, Mike Edwards won N2 million cash prize as the ultimate arena games champion. Mike was awarded for being the most consistent winner of the Bet9ja-sponsored arena games. This came after Seyi Awolowo was awarded winner of the ONE.org health advocacy challenge during the just concluded BBNaija season four. “It doesn’t take me a minute to expose all your…

Mercy Aigbe drags ex-husband, Lanre Gentry for calling her a…

Watch videos after the cut:

BBNaija: Mike and wife, Perri Shakes working out at the gym (Photos)