As viewers and fans of BBNaija 2019 gear up for the announcement of the winner of the reality TV show on Sunday, Uti Nwachukwu, the winner of Big Brother Africa season 5 says he suspects that the winner might not be from any of the popular housemates and as such shock viewers.

Revealing this through his Social Media page, he said he would be watching the show from the edge of his seat incase of any shocker.

What he wrote below: 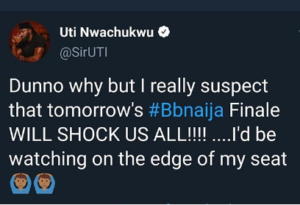