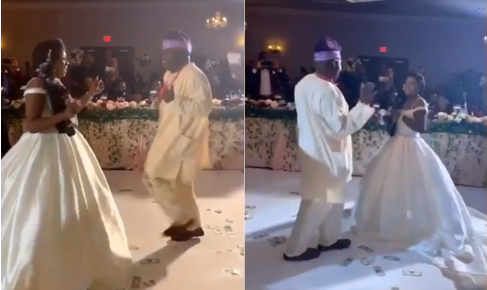 A video trending on social media shows a father displaying his serious dance moves at his daughter’s wedding. The yet-to-be identified father seemed so elated as he makes several moves on the dance floor, leaving many internet users in awe.

In the video, the father-daughter duo were called out for their special dance and rather than going the traditional route and dancing to a slow song that will draw tears and emotions, the duo decided to battle it on the dance floor.

The father who rocked a simple native attire with the guess of having a retired agbada hanging somewhere was seen schooling his daughter on his kind of dance. The bride looked elated as she watched her father express himself with his unique and hilarious dance moves.

The crowd could be heard cheering the father and daughter duo as they reminded people the very essence of life and the importance of a strong bond between a girl child and her father.

#BBNaijaFinale: Will Mercy be the first female to win the show?

Wizkid threatened me with a gun – Northboi