Update: Davido paid the 2 sisters to fake pregnancy as a publicity stunt to promote his new song? (Pics)

News made rounds on social media a few hours ago after a lady, Ellen called out Davido for impregnating her younger sister, Susan. The news spread like wild fire but plummeted as fast as it came. Recall we’ve had different ladies over the years come out to declare pregnancy for OBO and it lingers on for weeks and even months with his family members spearheading the moves on quelling the rumours. Let’s take a cue from the IBadan lady who was given a voice by controversial journalist, Kemi Olunloyo:

The saga went on even after the said lady gave birth to the child and everyone had their doubts. David as it were, has been beating the drums for his yet to be released single ‘Risky’ off his new album titled ‘A Good time’ scheduled to be released later this month.

He just released a teaser to the new song to be released by 6:30pm UK time today on his Instagram page right after the whole saga died down. See Video below:

The father of three while reacting to the rumours of him impregnating Susan, he had the #Risky hashtag in most of the tweets. See screenshots below: 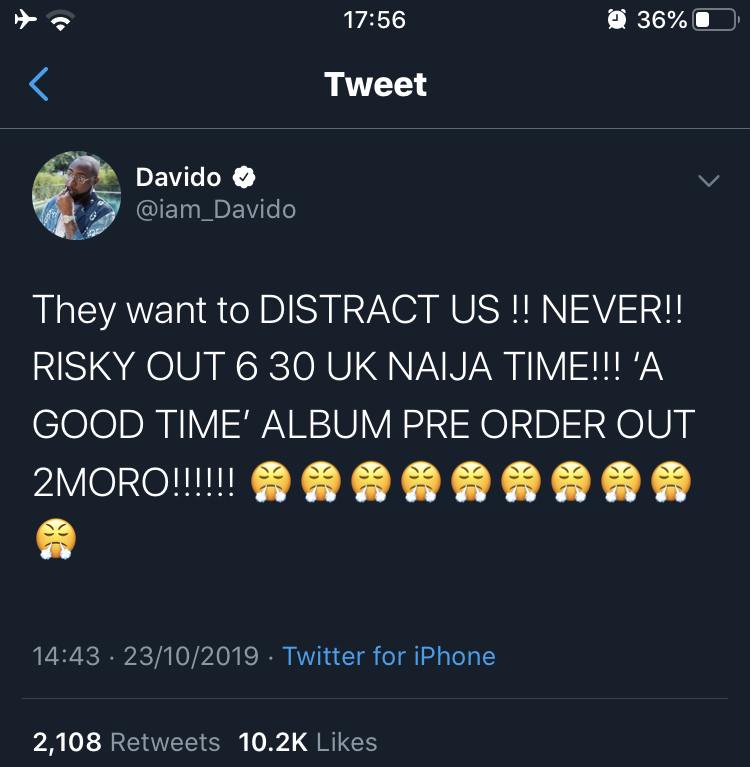 If there was really a ‘caught’ we’re quite sure Davido would parade the ladies and the bounty hunter who got his N1million Naira cash on his Social media. Does he really need to go that low? He’s one of the biggest act in Africa. If David coughs Into the Mic, people would come off with a new dance step to it.

Perhaps, anything passes for show biz.

The last straw pulled by Davido confirms the rumours of him paying the two ladies for PR.  He uploaded a video of the two sisters having a nice time in the pool on his Instagram page and of course they were cruising to the same ‘Risky’ track. Watch video here