Federal Government to place tax on soft drinks, others – Minister of Finance 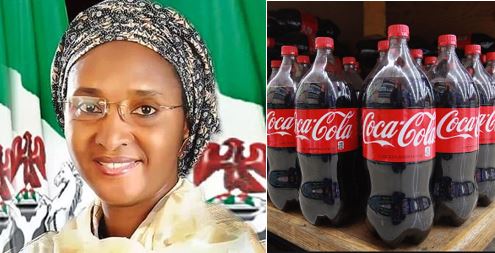 Nigerians should brace up for new taxes for soft drinks, the Minister of Finance, Budget and Planning, Mrs. Zainab Ahmed, said on Thursday.

Responding to reporters’ inquisitions on the sidelines of the ongoing Annual Meetings of the International Monetary Fund (IMF) and the World Bank in Washington DC, the minister said the new tax is part of plans by the government to widen the revenue net.

She, however, disagreed that revenue generation was the motive behind the closure of Nigeria’s land borders with its West African neighbours.

Rather, she said the lack of cooperation from the neigbhouring countries in checking the influx of goods into the Nigeria through unauthorised routes triggered the border closure policy.

Mrs. Ahmed, who spoke on “Strengthening domestic revenue mobilisation” at a forum tagged “Governor Talk’, explaining the inevitability of introducing a tax for soft drinks and other imported food-related items.

The minister explained that the government plans to introduce excise on specific items such as carbonated drinks as well as impose Value Added Tax (VAT) on some items imported into the country.

She said: “We are also looking at introducing excise duties on some categories of products, especially carbonated drinks and VAT on some categories of imports into the country. But, it is not all tax increases; there is also a proposal to build tax rates for SMEs. We also increase the minimum tax level to make it easy for people to plan their taxes.”

Stressing the need to re-establish the social contract between the government and the citizens. Ahmed said:  Nigeria, we don’t have adequate social contract. The government was not asking for or enforcing tax collection and, therefore, taxpayers also were not taking up their civic responsibilities. This is because we are largely dependent on oil revenue and people are not used to paying taxes.

Very recently at the Nigeria economic summit, they shared a citizens survey and 75 per cent of people that was surveyed said ‘we don’t think there is anything wrong in not paying taxes and it is not a problem’ and there was a few that said ‘I don’t see what the taxes are used for. So, why should I pay tax’?

We have a very low tax morale. We are planning a strong strategic communications process to educate people on why they need to pay taxes. Because we rely heavily on oil and it is not going to be there forever. So, we have to boost domestic revenue generation and use tax revenue to develop their economies and Nigeria should not be an exception.

We currently have a pervasive revenue generation problem that must change to successfully finance our development plans. Speaking to the facts, our current revenue to GDP of eight per cent is sub-optimal and a comparison of oil revenue to oil GDP and non-oil revenue to non-oil GDP performance reveals the significant area that requires immediate and dire intervention in the non-oil sector. This performance attests to the realities of our inability to efficiently and to a reasonable degree, completely collect taxes from our non-oil economic activities.

“Nigeria, when compared with its peers, shows that we are lagging on most revenue streams, including VAT and excise revenues, as we not only by far have, one of the lowest VAT rates in the world, but weak collection efficiencies.

“Also, do we have a lot of incentives and deductions that further constrain the fiscal space that is given in hope of stimulating growth of our industries and to reduce hardship for the poor and vulnerable.”

According to her, the government is working with the National Assembly to review its joint venture contract of 1989, “which had a position that once the oil price goes beyond $20, there is opportunity to renegotiate and increase the royalties that come to the government, so that in the future, we have incremental revenue coming from the crude oil.

”In tune with the fourth industrial revolution, we want a technological reform. For example, in a bid to leverage available big data in our public sector domain, Project Light House was launched last year and driven centrally at the Ministry of Finance to provide intelligence to the FIRS, state tax authorities and other revenue collecting agencies.

“On the Customs front, we are in the process of developing our national single window and customs is using block chain technology to improve revenue.”

On border closure, I disagreed the insinuations that revenue generation was behind the decision.

She said: “No.  Nigeria needed to close the borders because we were not getting cooperation from our neigbouring countries.”

The minister said the failure of the neighbouring states to abide by bilateral agreements they reached with Nigeria was responsible.

She said: “We have over the years been committed to some alliances and bilateral agreements, but our neigbbours were not respecting those bilateral agreements and at this time when the President has signed Nigeria up to the African Continental Free Trade Area (AfCFTA) agreement, it becomes more important for us to make sure everybody complies with the commitments that are made.”

She stressed: “The practice our neighbors have engaged in is hurting our economy. It’s hurting our local businesses and we have to make sure that stops.

“That is the purpose of the border closure and not generating revenue,” she said, adding that “if revenues are generated, it’s a consequence, but that’s not the purpose.”

She, however, gave assurance that “the moment the neighboring countries show readiness to comply with the commitments that they have signed to, there will be discussions at the level of the Presidents where we will extract strong commitments from our neighbours and the issue would be resolved.”

On debt profile and management, Ahmed insisted that Nigeria has no debt problem.

The minister, however, admitted that the underperformance of the country’s revenue was causing a significant strain in Nigeria’s ability to service its debt and government’s day-to-day recurrent expenditure, saying “that is why all the work we are doing at the Ministry of Finance is concentrating on driving the increase in revenue.”

Ahmed said there would be discussion on the proposed $2.5 billion to $3 billion facility for the power sector development programme in Nigeria, including the development of the transmission and distribution networks that will involve removing the challenges that are currently bedeviling the electricity sector.

She said: “We are going to have a full meeting to discuss the power sector recovery programme, and back home, we have been working a great deal with the World Bank to design how this programme will be implemented. So, we have an opportunity now to have a direct meeting with the leadership of the bank and to tell them the plan we have and how much we need from one to five years.

“So, the funding could be as much as $3bn and we are going to be pushing for it to be provided in phases. Phase one will be $1.5 billion and Phase II will be another $1.5 billion.”

On the 2020 budget proposal, Ahmed said it was an abnormality that Nigeria has not been focusing on tax revenues in funding its budgets, adding that this time around, what the government is “trying to do in the 2020 budget is to harness the full potential of revenue mobilisation within our country.”