Help me find those ladies and get N1million instantly – Davido

Nigerian singer, Davido has placed a bounty hunt on the ladies who publicly accused him of impregnating one of them. He promised to give out N1million to anyone who helps him to locate the lady who accused him of impregnating her. Earlier today, the video of a lady and her sister surfaced on the internet. In the video, they claimed Davido impregnated one of them and has refused to take responsibility, despite their efforts to reach out to him.

The lady identified as Helen claimed Davido impregnated her sister who also appeared in the video.

According to her, her sister was arranged for Davido by his personal assistant Lati and they had a one-night stand, which led to her getting impregnated.

HOT NOW >> Davido paid the 2 sisters to fake pregnancy as a publicity stunt to promote his new song? (Pics)

They however claimed Davido has not been reachable since she noticed she was pregnant for him and all they want right now is for him to come and claim the pregnancy.

Y’all taking this clout chasing and social media shit too far!! Imma go to the end of the world and use all my power to make sure dem hoes end up in prison!!!!! 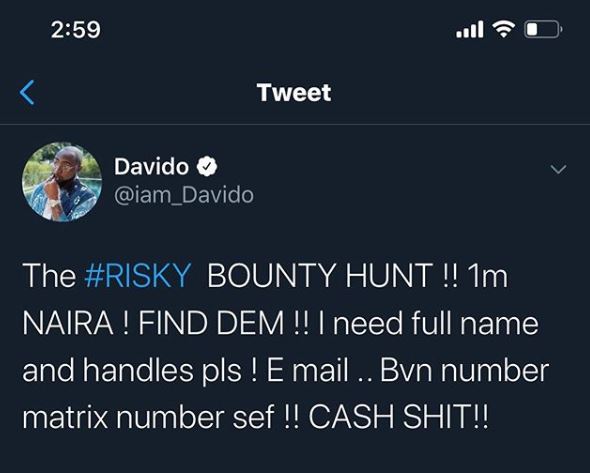