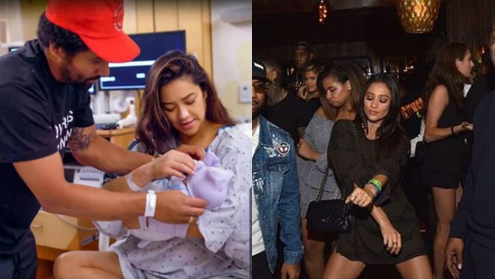 Hollywood Actress Shay Mitchell was shamed for attending Drake’s birthday last week only three days after giving birth to her baby girl. Singer, Drake celebrated his 33rd birthday on October 24 and invited his celebrity friends to his lavish party. Pretty Little Liar actress, Shay Mitchell was one of those in attendance. But fans felt it was inappropriate because she had announced only three days prior that she welcomed a baby. Shay received a hefty amount of backlash as a result.

“You partied three days after her birth…no respect,” one Instagram user said to Shay. Shay replied the mommy shamers in a now-deleted video posted to her Instagram Story. She explained that, although she posted the announcement photo three days prior to partying with Drake and other celebrities, that wasn’t the actual day she welcomed her daughter to the world.

She said: “I haven’t been really checking my comments that often, but apparently, people are really upset that I left three days after having a kid to go out and party.”

“It wasn’t three days and she was with [my dog] Angel, so…” she joked.

She later took to Twitter to make it clear that she was joking about the child being under the care of her dog Angel.