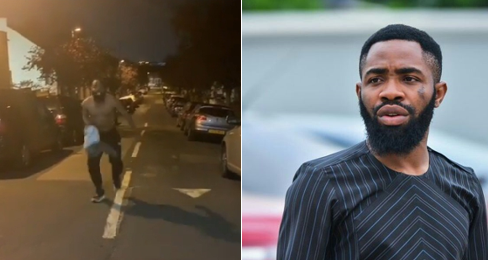 Popular Instagram comic act, Oluwatoyin Bayegun aka Woli Arole was spotted shirtless in the streets of East London after his team won in the League Cup Round of 16 clash between Chelsea and Manchester United. Excited Arole, who is a United fan hit the streets shirtless to celebrate United’s deserving win in Chelsea’s backyard. The dramatic comedian could be seen hailing London’s metro buses and private vehicles and they all found a way to easily hit the foot on their gas to avoid a ‘Crazy shirtless man in Fulham’. The Instagram celeb also took advantage of the win to bless some of his fans as he asked for their account numbers. In his words:

Na Manutd dey make me celebrate like this ooooooo. I dey give money to only Manutd fans. Only Manutd should drop their account number now!!!!!. I sabi una ooooo!!!!. I am so so happy, all my prayers didn’t go in vain.