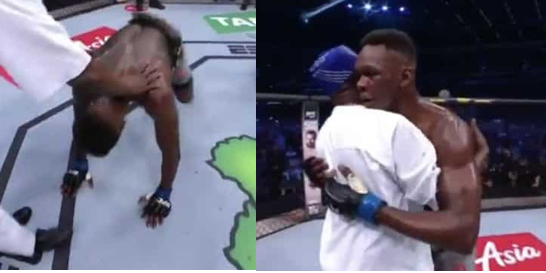 Here is the moment Nigerian-New Zealander professional boxer Israel Adesanya prostrated before his parents and presented his midweight belt to them after becoming the undisputed middleweight champion of the UFC.

See video and photos below; The performance on the night means Adesanya has now improved his MMA record to 18-0-0 and his UFC record is 7-0.

BBNaijaFinale: ‘All of you are winners to me’ – Tacha pens lovely message to top 5 finalists

See what Khafi did when she saw Gedoni last night (Video)