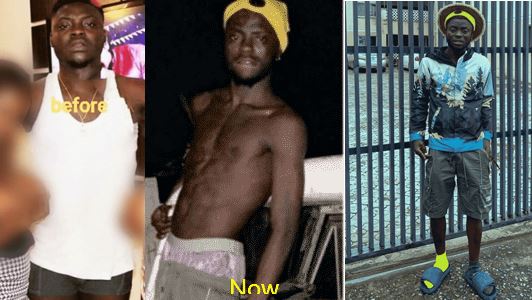 Popular Nigerian p*rn star, Kingtblakhoc caused a stir on Instagram after he shared his old and recent photos on the social media platform. The adult movie star who is renowned for sleeping with different women on camera without any sort of protection was spotted looking quite lean in his “after” photos. Tobiloba Isaac Jolaoso born (12 May, 1993), first Nigeria Male Po*nstar better known as KingTblak HOC is a Nigerian Entrepreneur and First P*rnographic film actor to come out boldly in Nigeria and in whole Africa together at once, who is first known for posting raunchy photos on his instagram, a social media application for sharing photos, and most notably with the use of his first Snapchat account which was later taken down by the management of Snapchat, a social media application that let individuals share videos with friends that automatically disappears after 24 hours.

BBNaija: Mercy receives beautiful portrait painting of herself from a fan (Photo)