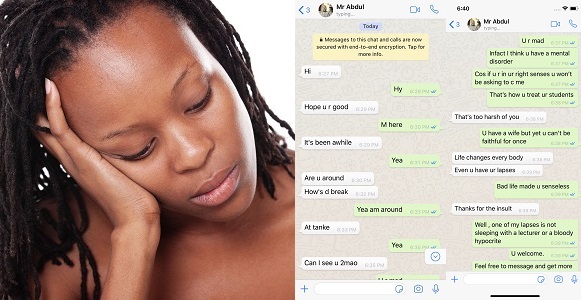 A Nigerian Lady identified as Busayo has shared a conversation she had with her lecturer in what seems like he’s making sexual advances at her.

According to Busayo, the said lecturer identified as Mr. Abdul failed her in his course, after she refused to sleep with him.

The conversation clearly shows the lecturer trying to ‘beg for forgiveness’ from Busayo, but she was having none it.

Busayo in the conversation called the lecturer unprintable names, apparently, she’s still angered by the treatment Mr. Abdul meted on her.

“I really don’t think you deserve all this. Stop being like this. Seeing you is for just to beg for your forgiveness. Not good to sound this way”, reads a message Mr. Adbul sent to her.

ALSO READ: ‘I think my boyfriend is sleeping with his Mom’ – Nigerian lady cries out

See screenshots of the Whatsapp conversation below;

From the coversation between them, there is no way the lecturer has not had the cookie and man is just coming back for more. The lady feels she could jump on the #sexforgrades train to expose him but she seems compromised already. This in no way does not exonerate the lecturer in no way, we hope further investigation is made and the school authorities take swift action to prevent more situations.

Though, many have argued that the story isn’t complete.. as a main ingredient in the story wasn’t included.

Folks are saying, she probably slept with the lecturer, and still failed her.. Probably her reason for her anger.

Someone on Twitter said, “If he truly failed you, I don’t think the lecturer will have the confidence to still buzz you and ask to see you tomorrow”