A Nigerian lady has taken to twitter to recount what the supposed fans of Nigerian Musician, Naira Marley popularly known as ‘Marlians’ did to her.

Lady identified as Lilian took to the platform to disclose hoe Naira Marley’s name opened door for her, She recounted that repair works were being done on the route leading to her residence and a blockade was formed by ‘Land grabber’ aka Omo Onile in order to restrict movement for the quick completion of the road.

According to Lilian, every commuter was mandated to go use another route which she described as longer. Luckily for her, she was playing the singer’s ‘Mafo’ hit in her car and that granted her access by the land grabbers who were excited they’d met a fellow Marlian.  Read her story below: 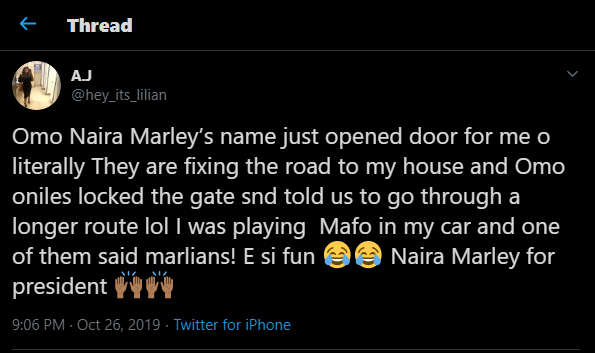