British Singer, Adele has shocked many of her fans with her body transformation. The 31-year-old singer lost so much weight and she showed off her incredible weight loss at  rapper, Drake’s birthday party on Wednesday night, October 23.

She is believed to have lost more than a stone in weight after taking up Pilates. Adele looked sensational as she showcased her killer frame inside Drake’s 33rd birthday bash, which was held at Goya studios in Hollywood on Wednesday.

The Rolling In The Deep singer, 31, stunned in an off the shoulder black velvet gown as she partied the night away with her pals at the glitzy bash. See photos below: 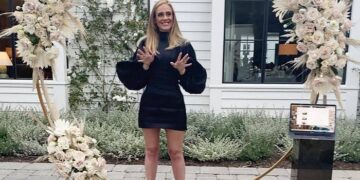