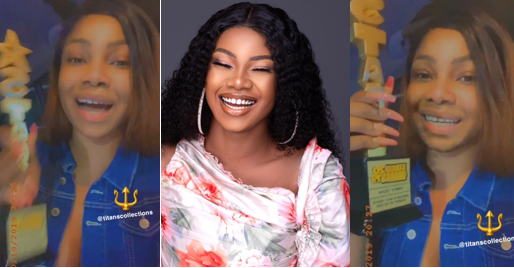 Big Brother Naija star, Natacha Akide popularly known as Tacha has posted her first video since her exit from photo sharing platform, Instagram. The former controversial housemate has now made her Twitter page her primary account after deactivating her Instagram page. In the video, Tacha thanked her fans for voting her as the celebrity of the year at StazzAwards and also warned that they should not pay attention to any awards she does not post on her official Social Media pages.  According to her, the awards organizers coined out an entirely new category that was not even on their official page for her.  She further stated that she would have rejected the awards if not for the efforts of her fans who had expended time and resources in voting for her.

Tacha couldn’t hide her joy as she meets Grammy Award…

READ ALSO: ‘They are now free and living good life’ – Davido shares video of 2 sisters who accused him of pregnancy

The brand influence also announced the launch of one of her brands called Titans Collections, an online store where her fans can purchase what she termed as ‘ Tacha Merchandise’

Controversy broke in the the camp of Titans after their Queen, Tacha went excommunicado on photo sharing platform, Instagram. Be we believe she deactivated her account to build a stronger presence on other social media platforms.

“Mompha is lodging in a private hotel”- Kemi Olunloyo claims