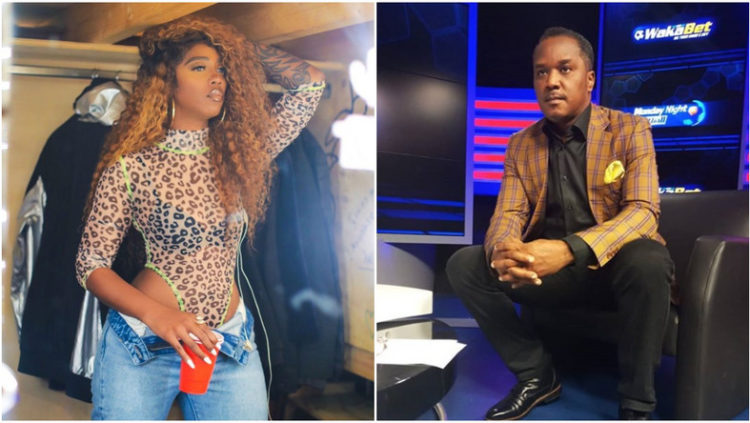 Share on FacebookShare on Twitter
Fights and rivalries in The Nigerian Entertainment Industry is a thing most fans have to envisage as they are inevitable. Some rivalries go as far as death threats and end up to be a lifelong situation of beef. The year 2019 has had it’s share of vendetta between celebrities who end up revealing dirty secrets about each other to the public. With just about two months left to the end of 2019, there have already been several conflicts between entertainers. In no particular order, Olajide Samuel takes a look at some of the celebrity feuds that made the news

The brawl between Liz Anjorin and Toyin Abraham was indisputably one of the most talked about celebrity feuds of 2019.

Like a scene from a movie, Anjorin took to her Instagram page to accuse Abraham of filing a report against her to Saudi authorities that she (Anjorin) was trafficking cocaine, which led to her being searched at the airport. Anjorin also claimed that Abraham often opened fake social media pages to criticise her colleagues online.

Reacting through her lawyers, Abraham warned Liz to retract her posts and apologise to her or risk being sued. Responding, Anjorin’s lawyers also threatened to counter-sue Abraham.

Anjorin maintained that Toyin had her new baby at a traditional birth attendant’s place, while Abraham released a video showing her in a Lekki-Lagos hospital, in what seemed to be shortly after she was delivered of her son.

Though both actresses have not publicly apologised to each other, it seemed they listened to the advice of the President of the Theatre Arts and Movie Practitioners Association of Nigeria, Bolaji Amusan, aka Mr Latin, who cautioned them to stop the ‘warfare’ on social media.

Speaking in a video broadcast shared on Instagram, Mr Latin had said, “From today, any of you (Toyin or Liz) that posts anything on Instagram, whether positive or negative, the industry will penalise such person. Enough is enough; it’s getting out of hand. Liz Anjorin and Toyin Abraham, this is the last warning– if you post anything, you won’t like what will happen.”

Nigerians will not forget in a hurry the drama that played out when in May, actress, Uche Ogbodo, shared series of sensual pictures to celebrate her birthday. Actress and comedian, Eniola Badmus, condemned Ogbodo, saying that despite the provocative nature of the pictures, they didn’t get her the attention she craved. This was weeks after Ogbodo had publicly body-shamed Badmus.

Eniola wrote on her Instagram, “Uche Ogbodo­– joker, you were pulling me down on Instablog like you were the greatest. Women supporting women is not in your dictionary”.

Once upon a time, Cossy Ojiakor and Halima Abubakar used to be best friends. However, the beat of their once chummy relationship changed and Cossy later revealed that Abubakar betrayed her.

Some months ago, Uche Ogbodo shared a picture of herself, Uche Elendu and Halima Abubakar on her Instagram page. Cossy then commented on the picture, referring to Abubakar as a snake.  She claimed that it was Abubakar’s then boyfriend that wrote a story that she (Cossy) slept with a dog for money.

In a recent chat with our correspondent, Cossy said, “When one doesn’t like certain people, one lets them know and set oneself free. It’s not about getting an apology, it’s about my history. It’s so unfortunate that I allowed her (Abubakar) into my life.”

Meanwhile, Abubakar has kept mum about the allegations Cossy levelled against her.

Earlier this month, talented songstress, Tiwa Savage, and football analyst, Charles Anazodo, engaged in a feud on Twitter. It all started when Anazodo accused the singer of walking past him without saying ‘hi’ when they met at a radio station.

However, the ‘Lova Lova’ singer didn’t waste time in replying Anazodo. She wrote, “Firstly, I’m sure you saw me rushing to the studio because I was late for my interview, plus I had a hat on. Secondly, I’m glad I didn’t say hi because who are you to think you can’t say hi first”.

The verbal exchange continued as Charles responded to the tweet, writing, “I’m nobody– just another human being. Cheers”.

The fallout generated a lot of reactions from Nigerians on social media.

The duo of MI and Vector are talented rappers that are often compared to one another. Though the rappers’ lyrical dexterity has never been in doubt, they have never featured on each other’s songs.

On August 30, 2018, Vector had reacted to MI’s song titled, ‘You Rappers Should Fix up Your Lives.’  During a radio interview, Vector maintained that MI was wrong to have condemned Nigerian rappers in the song.

Fast forward to 2019, MI and his team threw a jab at Vector on a song, ‘Martell Cypher’. This led to Vector and his crew ‘dissing’ MI on the track, ‘The Purge’. Thereafter, MI directly fired ‘shots’ at Vector in the ‘diss’ track dedicated to him and titled, ‘The Viper’.

In the song, MI branded Vector a snake, stating that Vector had allowed bitterness to consume him. Unrelenting, Vector fired back at MI in the song, ‘Judas the Rat’, where he claimed MI was responsible for the failure of Jesse Jagz’s music career.

He sang, “Jesse Jagz, you’re my buddy. I couldn’t do this in a hurry but the truth about your brother has been blurry. So, sometime in this sermon, I will say some uncomfortable facts to show his fans their GOAT (Greatest Of All Time) is really a rat. Let’s start the lecture…”

Though some concerned persons have tried to mediate between the two rappers, it doesn’t seem like they are ready to sheathe their musical sword anytime soon.