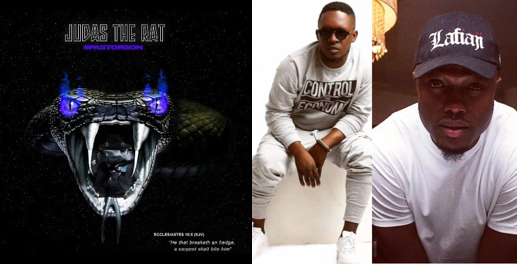 The Nigerian rap scene has been on fire since Vector and MI Abaga have started a face off through the MIC! Vector “Judas The Rat “ has finally responded to MI’ Abaga’s diss rap; “The Viper.” Just as we have envisaged, He wouldn’t let MI Abaga’s scintillating performance at the BBNaijaFinale slide. Vector made a narrative of many alleged dark sides of MI and really looked to hit him hard where it would hurt the most.

The approximately 4 minutes record is expository and belittling! Vector had to go overboard by subtly dragging MI’s brother; Jesse Jagz, in the record and made sure MI was painted black for his failings. This record, however, would make even the long-standing beef between the two arch-rivals come to a conclusion that truce might not be called anytime soon.

Vector  “Judas The Rat” and this is in response to MI calling him a “Snake.” Listen to the record and share your thoughts. Did Vector annihilate MI or he hasn’t attained parity with the Short Black Boy. Listen Below: