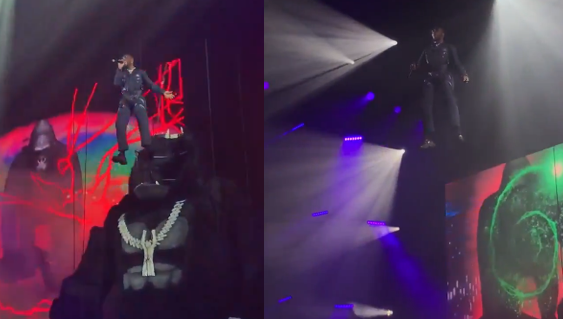 Nigerian superstar singer, Damini Ebunoluwa Ogulu popularly known as Burna Boy has done to unthinkable yet again after he had a brilliant entrance at his African Giant Tour, London Edition. It was a total shut down at the Wembley Arena, London last night as Burna Boy serenades his eclectic fans with his hit songs and master performances on stage.

The video of MTV awards winner’s grand entrance has been making rounds on Social Media all night with many giving different meanings and symbolism to Burna’s act that depicts strength in the African man. Burna is truly the African Giant. Watch his grand entrance below:

The 2019 BET International Act award-winner and Afro-fusion’s brightest star, Burna Boy, returned to the UK for his African Giant Tour and it was a fiery live show, he performed material from his new album, as well as an extravaganza of hits.