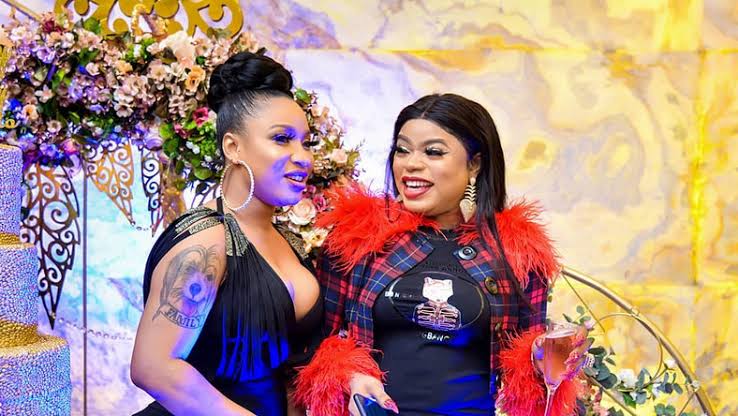 There is a twist to the story of Nollywood actress, Tonto Dikeh and her bestie, a male crossdresser, Idris Okuneye aka Bobrisky, in Dubai and why they are still remaining in the city.

Recall that Bobrisky and Tonto Dikeh visited Dubai for the star-studded One Africa Music Fest that held weeks ago, which most Nigerian celebrities and big boys also attended but they have all returned to their various businessmen except for Tonto Dikeh and Bobrisky that are still in the city till date.

A Nigerian blogger, Kemi Ashefon has now revealed that Tonto Dikeh, Bobrisky deceived fans with fake surgery to cover up themselves in Dubai as they still have issues with the Police.

Reprieve has come the way of Nollywood actress Tonto Dikeh as she not only left Dubai prison, she also got her passport back from Dubai prison authorities.
There is more to congratulate her for.
Tonto Dikeh, who was detained for public misconduct during an event in Dubai and also for having traces of drugs in her blood, was rescued from deportation or imprisonment by paying a fine.
Kemiashefonlovehaven exclusively gathered that her friend, Paul O. who is the CEO, One Africa Global, who is the organiser of One Africa Music Fest, paid the fine.
“Paul O. had to pay the fine after gathering money from other friends. Remember, his event, the One Africa Music Fest, was what brought Tonto and Bobrisky to Dubai before Tonto was arrested and detained penultimate week,” a source disclosed to Kemi Ashefon.
Prior to the payment of fine in a Dubai Court, Tonto who was granted bail, could not travel to Nigeria due to the fact that her passport was seized and she had to report daily to the police in Dubai.
Bobrisky had to wait for her since they claim to be best friends.
“That was why she and Bobrisky devised a fake story of ‘surgery’. Bobrisky, had earlier in the week put up a post on Instagram that he was about having a surgery. Then, he also put up another bloody photo of a surgery he had but that he bled so much!
That was a lie! It was to buy time and also allow everyone believe they were busy having surgery in Dubai since everyone who attended the One Africa Music Fest had left Dubai and returned to Nigeria,” a source in Dubai revealed to Kemi Ashefon.
Tonto, after her release, had taken up blogger, Stella Dimoko-Korkus and written all sorts against her for breaking the news of her arrest and detention in Dubai prison.
Recall Tonto was arrested penultimate weekend when she attended an event at the Festival Arena, Festival city Dubai. She was denied entry by security personnel and her unruly behaivour earned her an arrest. After her arrest and a search was run in her hotel room, the police found out that she came to Dubai with hard drugs which she must have been taking and also some traced in her blood.
“Tonto and Bobrisky could be on their way back to Nigeria now since Tonto had been sorted out by Paul .O. There was never a surgery. Rather, there was an arrest, a detention, a bail, a fine slammed on her, a payment by Paul O and her passport released to her. She may be on her way back to Nigeria or could still be in Dubai depending on the terms laid out by the police when she was released,” sources revealed.