“Golden Boyz entertainment” record label is taking singer, Peruzzi to court over a breached agreement, according to the content of a court document that we obtained.

The record label has made legal moves to stop Peruzzi from recording new songs or even featuring in songs of other artists.

GoldebBoy Entertainment alleged in their court document that while it has fulfilled its obligation under the agreement towards Peruzzi, he has in flagrant violation of the terms of the agreement been going about writing, producing, performing and co-performing other musical works for other entities without the consent of GoldenBoy Entertainment.

Peruzzi bribed you to counter my story – Lady who… 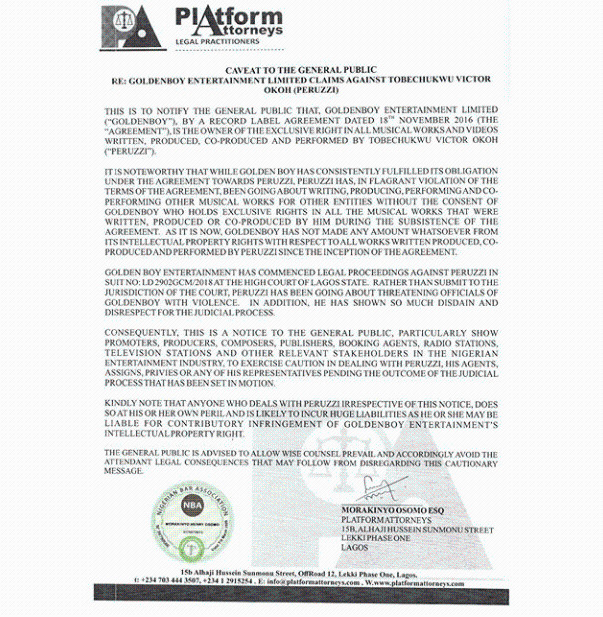 “GoldenBoy Entertainment has commenced legal proceedings against Peruzzi in suit Suit No: LD2902GCM/2018 at the High Court of Lagos State. Rather than submit to the jurisdiction of the court, Peruzzi has been going about threatening officials of GoldenBoy with violence. In addition, he has shown so much disdain and disrespect for the judicial process.”

It went on to explain that;

”as it is now, GoldenBoy has not made any amount whatsoever from its intellectual property rights with respect to all works written, produced, co-produced and performed by Peruzzi since the inception of the agreement.”

Buhari condoles with Atiku Abubakar over the death of his aide