Shut Up! Your father is broke and no longer a billionaire – Social Media user blasts DJ Cuppy

Moments after Nigerian DJ and billionaire heiress cleared the air on what she does for a living, an intrusive social media user reacted to her claims of being a heiress to a billion dollar fortune. The user took to her comments section to remind er that her father, Femi Otedola is not a billionaire anymore..At least not in dollars. We could find some truth in this statement tho but exchange rate between the Naira and other foreign currencies would be against us.

According to Forbes, Femi Otedola is no longer in the Billionaire in dollars club but $300 million worth is not a child’s play and DJ Cuppy has the right to brag from now till the end of time. My dear, there are levels to being broke and 90% of Nigeria’s population wish to be as broke as Ote$. See the online troll’s comment below: 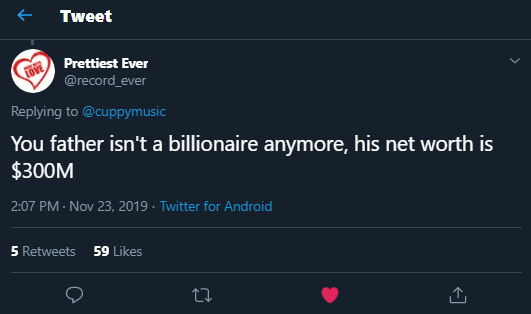 Femi Otedola, pledges N1 billion towards the fight against Coronavirus in Nigeria

Coronavirus will not compromise my art – DJ Cuppy declares