Controversial Nigerian actress, Tonto Dikeh has disclosed what she goes through as a rich woman.

According to the actress, as a rich person people are always asking from you with no one giving you.

She took to her Instagram story to lament about the problem as well as seek God’s face. 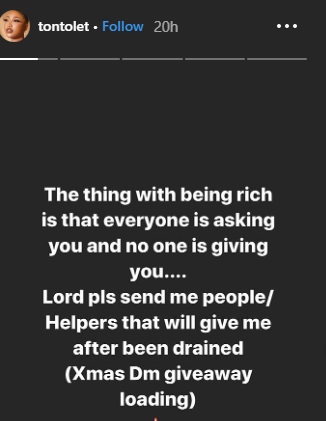 In other news, Wilfred Ndidi could be joining Arsenal before the end of the January transfer window.

Arsenal’s new boss, Mikel Arteta has now made the Super Eagles star a priority signing going into the winter transfer window according to the Mirror.