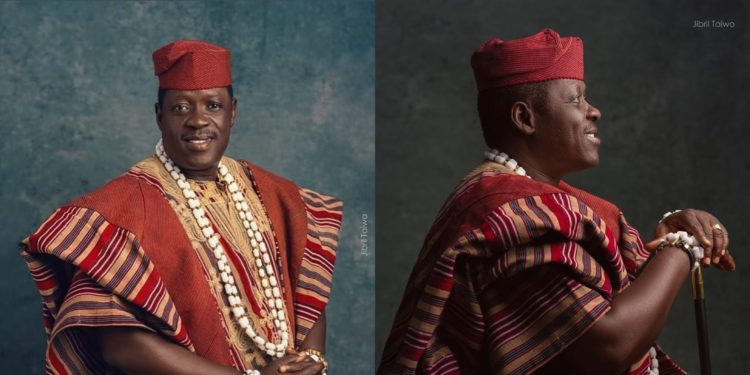 Nollywood veteran Actor Taiwo Hasan popularly known as  Ogogo marked his 60th birthday in grand style in Lagos over the weekend and it saw the finest in Nollywood and dignitaries attend the star-studded event.

The Yoruba actor who turned 60 on the 31st of October had to give himself the time to plan a grand birthday ceremony which included a novelty match played in his honour, celebrities in the Yoruba Nollywood scene storm the perfect owambe ceremony and getting a car gift from Senator Adeola Yayi . Ogogo also took out time to recount how how he fell ill in 2004.

It was a sickness that took him up to 8-years to recover. Of course, there were lots of rumors as to what may have led to the sickness. Some said he might have swallowed Cocaine which got burst inside him.

In a chat with City People, Ogogo opened up on how he suffered ULCER and how he did not know it was Ulcer until it had perforated his intestines and how it made him lose so much weight which made so many colleagues, friends and family members run away from him during his 8 years sickness.

Read full except below:

What really led to your sickness in 2004?

The sickness started from 2004 to 2012, before I started recovering in 2013. I only hear of ulcer, but I’ve never experienced it. I woke up that day, dressed up for the job I have at Ipaja. It was Arakangudu’s job. It was during the Ramadan season, and that day was Day 4 of the fasting. I don’t normally take Suhur (the early morning meal that Muslims take during Ramadan), once you give me a cup of tea I’m okay.

Even when I want to break the fast, I don’t normally eat much. In the family I come from, it’s compulsory for everyone to fast, if you don’t, you are in trouble. So, we left for the location, but along the way, I just noticed, before we got to Ikeja that I wasn’t feeling comfortable. I started feeling strange, feeling sharp pains in my abdomen. I felt so uncomfortable and I was the one driving. Shina Bankole used to be a nice guy to me; as he used to follow me everywhere he’s with the marketers.

He asked what was wrong, but I couldn’t explain. I managed myself to that location, but on getting there, I couldn’t do anything. Remi Surutu was on that location. After a while, she noticed the way I was behaving, and she asked, “Egbon mi e duro, se kii se Ulcer ni nkan to n seyin yi” literally meaning: I hope this is not an ulcer. I said it’s not possible. She called Shina and asked him to get me milk and cold water. At first, I was scared when it dawn and on that, I was going to break my fast, but immediately they mixed the milk with the water and I drank it. I asked her what next, she said I would need to see the doctor because she’s very sure it’s ulcer.

I just managed myself on that location that day. Out of 11 scenes that I was supposed to do, I did 7. The producer of the job, Arakangudu wasn’t around that day. He didn’t know what was happening. To cut the story short, I couldn’t go back to complete the job. I met with a doctor the following day, he did a scan and he explained the result to me. He showed me many affected parts in my stomach.

That was how the whole saga started. I pray you will not fall sick. I saw hell. If I ate anything, as small as a baby spoonful of rice. I would vomit. If that rice remained just a seed in my stomach, I would be vomiting blood, I would almost vomit my intestine. For 7 good months, I was always observing my prayers on the seat. I couldn’t stand, I couldn’t walk, I quickly emaciated and so lean. There was a day I was at home and I decided to take a walk and probably barb my hair. I noticed the breeze was virtually carrying me, but I managed myself. On getting to the barber’s shop, I pulled the sliding door, saw myself, and how looked in his big mirror opposite the entrance door, I broke down in tears. I was crying uncontrollably tears, asking myself “is this me?” People pacified me, I was barbed and I went back home. I spent years on it. People said a lot of things, that I carried cocaine while some said I contracted HIV.

They said all manner of things. It got to a stage I had to switched off off my phone, removed my first line when people mostly bombarded me with calls and I got another line just in case I wanted to talk to people. That was how I lost that my first line. They started carrying me from one place to another. There was nothing I didn’t do, but all Glory belongs to God. As Muslims were praying for me, Christians were praying for me. I knew witches and wizards too did their best in telling God to keep me alive.

I was at home one day, about 8:30 and I got an international call. I picked it and a man said somebody brought my name to them for prayer and they’ve been on it for the past 7nights. He asked me not to off the phone, he put his own phone beside a speaker and for 55mins, I was hearing them praying for me seriously.

After 4years, I travelled to UK. There is a Chinese restaurant called 805, it was named after the no of the building at O’ kent road, we were there eating and a man walked up to me and called my name, at first, I wasn’t surprised because everybody knows me, not until he said they had a vigil on my behalf, lo and behold it was the same man who had earlier called me. You can imagine. This life is very funny. I’m a Muslim, my wife is a Christian and she decided to practice her religion which I allowed on one condition, she will never take any of my children to church. Now see how God helped me through her religion. Along the line, I had appendices and that one too was serious. I got married to another wife because people turned my wife against me during my sickness. One of the reasons I fear some churches when they tell you that a person responsible for your problem is the person that is very close to you. What do you think? When you have a wife and she begins to run from you. I asked her, do you also believe I’m HIV positive? If then, I will ask them to check you because I know myself and I know I’m not promiscuous.

It got to a stage; many of my colleagues couldn’t even shake me again, some could not embrace me again. God bears me witness, they all abandoned me. The woman I married later was a friend who we’ve for the past 2 years we’ve known ourselves. I was just passing-by one day and I saw her. I greeted her, she didn’t even know I was the one because I’ve really emaciated. It was my voice she was able to recognise when I told her I was the one. She said Sir T, what happened to you? Right there where she was standing, she was still there until I drove into another street.

I saw her by my side during that period. By the Grace of God, she gave me 2 beautiful children. My first wife said she knew it had been destined to be so because she trusted me, and she knew I was faithful to her. I’m not saying I’m a saint but I thank God for my life. We all have to be very careful in this life; the heart of a man is desperately wicked.’

Watch video of his party and him receiving a brand new car as birthday gift: