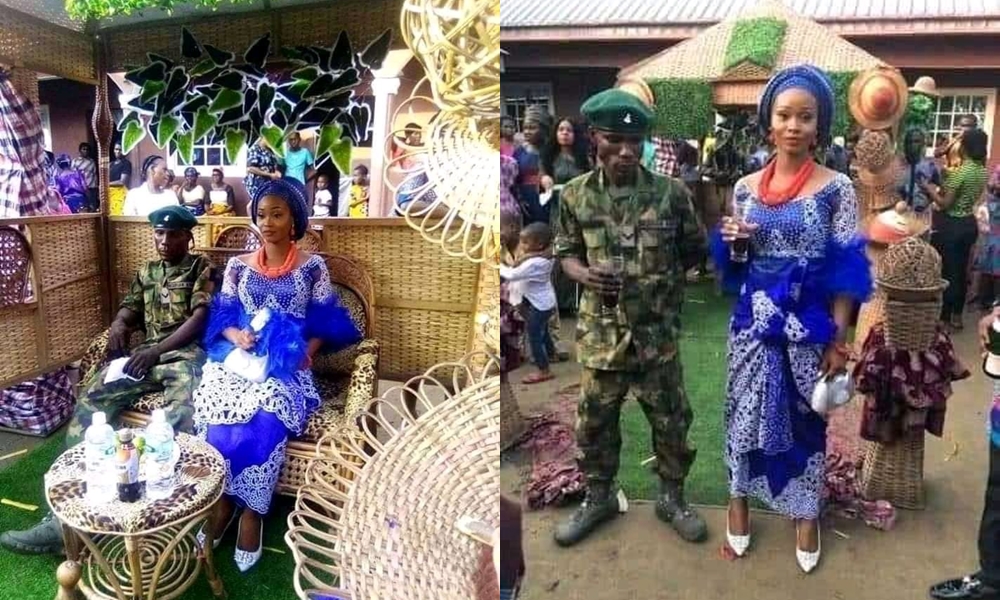 There are some photos Currently trending on Social Media from a traditional wedding of a military man in which he appeared to be anything but a happy groom taking home his beautiful bride.

According to Twitter user, @Emmylexxz, who shared the photos on the platform, the soldier who wore no smiles on his big day refused to change into a traditional attire to honour the ceremony.

He wrote: “Military man gets married, refusing to wear a traditional attire or even to wear a smile on his face. Seriously we are taking this military stuff too far ”

Photos from the wedding of former Pres. Obasanjo’s…

Military man gets married, refusing to wear a traditional ttire or even to wear a smile on his face

Seriously we are taking this military stuff too far 🙄🙄😒 pic.twitter.com/t4oyQPAUTr

The post garnered reactions from several social media users, most of whom wondered why he couldn’t ditch his uniform or even be happy at his own traditional wedding ceremony. Some people however expressed their fear concerning the girl’s safety.

You can't be BlacKkk, short and then be a military man, the stubbornness go mad 😀🤣

Sincerely, I hope the beautiful, cheerful, smooth and smiling woman I'm seeing in this picture will not end up with serious bruises in no time. May the marriage wear a smile…

At least he should have worn a ceremonial uniform. Combat fatigue isn't the only uniform military people have.

Lols , thier is so much not known here , military men makes the best lovers and we also have one of the best weddings , in this case something is amiss 😊🙏

Non sense and ingredients……
He for kukuma carry gun nah

Was she being held against her will? Because this dude doesn't look alright oh

Abi na the escort wey decide to snap picture with the bride? 🤔😂

This one is an "Oju Ogun veteran"
Not a single joy on his joyous day.