A Nigerian man is presently heartbroken after his girlfriend of 5 years told him she is getting married to an abroad returnee this December.

According to a Twitter user, @Buchi_smallzy who narrated the story, the lady told his heartbroken friend that her wedding has been scheduled to hold on the 29th of December.

The heartbroken man is said to have taken up his office leave in order to travel out of the country because he can’t stand the situation.

Buchi said the lady claimed she took the decision due to parental pressure.

“My Guy is fucked up! His babe for 5years is getting married to one foolish IJGB come December 29th and she just told him Yesterday and Man was crying telling me on the Phone! He taking up his leave and travelling out for 1month because he can’t stand it! I did the Link up

“I had to Whatapp her Yesterday and she invited me to the wedding and I was so close to insulting her using words like “She loves him but Family pressure”!! My guy is comfortable and the relest guy I know and it hurts me to see him cry to a girl I toasted for him back then!!”

“IJGB are rich Igbo guys based in Russia! They get plenty money from Russia oil business.” 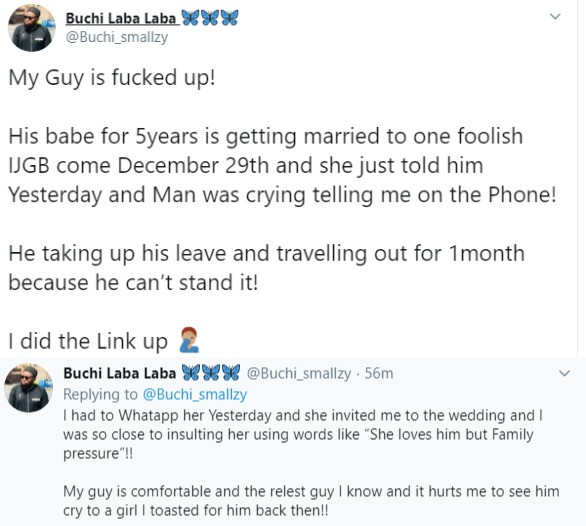