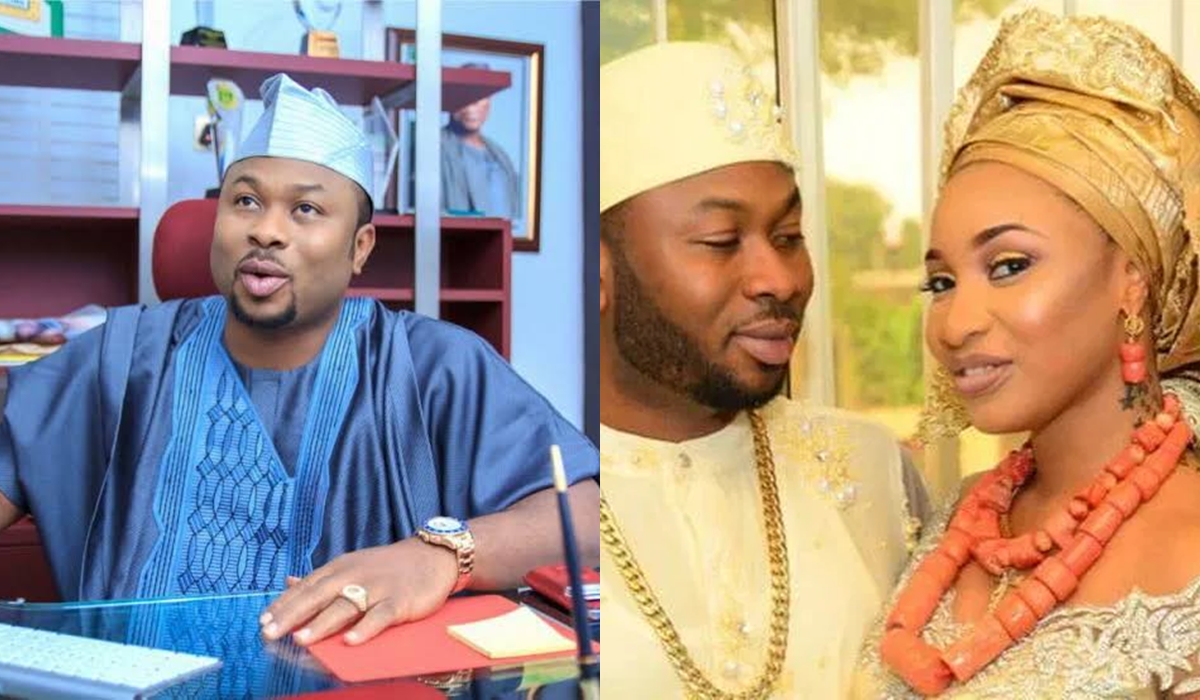 Tonto Dikeh is facing a serious custody battle with ex-husband, Olakunle Churchill, over reported neglect of their son, King Andre.

According to IG blogger, Kemi Ashefon, Olakunle Churchill is heading to court again, over the custody of their child, King Andre, since Tonto who is still in Dubai, have reportedly neglected their son. 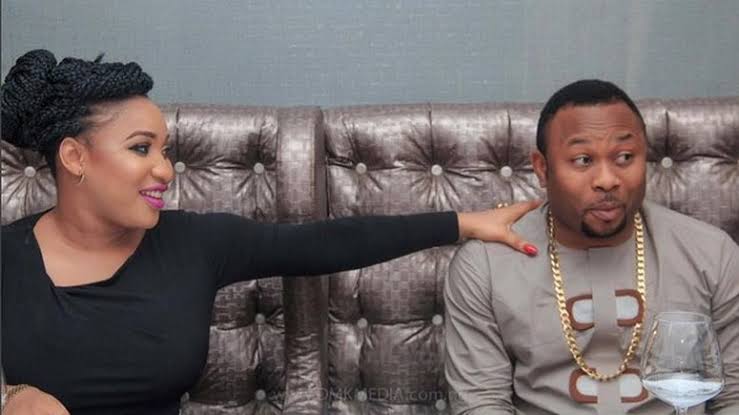 Indeed, it’s a tough time for Nollywood actress, Tonto Dikeh. If only she hadn’t gone to Dubai!
The actress, who is becoming calmer on social media lately, is definitely not having it as rosy as she tries very hard to portray on Instagram.

Now with the return of her ‘best friend’, Idris Okuneye aka Bobrisky, to Nigeria a few days ago, its obvious the hyper active actress is stuck in Dubai.

Arrested and detained in a Dubai prison five weeks ago when she was supposed to have attended the One Africa Music Fest and BamTeddy wedding, Tonto Dikeh was also charged to court but was later rescued from deportation/imprisonment by paying a fine.
Meanwhile, prior to the payment of fine in a Dubai court, Tonto who was granted bail, could not travel to Nigeria because her passport was seized and she had to report daily to the police in Dubai.
But the concern now is her son, King Andre.

The four-year-old son, a product of her marriage to businessman, Olakunle Churchill, not only lacked motherly care, King Andre is with a nanny that even his father cannot access.
“Tonto, who has the custody of the innocent boy, has stopped his father from seeing him and the estranged couple has been in court over the child’s custody since 2017,” a source revealed exclusively to Kemi Ashefon.

“She has changed the child’s name from King Andre Igo Oladunni Churchill to her maiden name, Dikeh. That is an abnominable act! He is the father, he foots the bill and you now changed his son’s name to your father’s name. The father, who has been giving a monthly allowance of N200,000 and paying school fees has been denied access to the boy despite court order.” 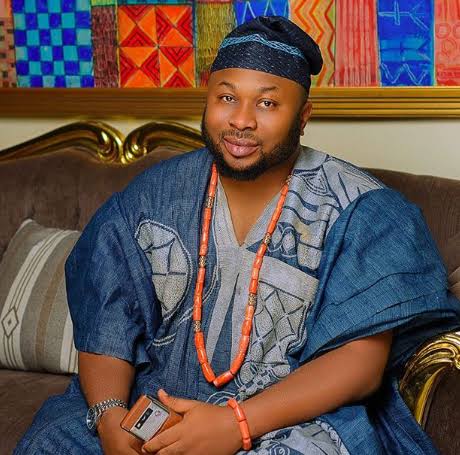 Though Tonto claimed the bride price was paid with her money, there have been several denials from the ex husband, who claimed he paid the dowry with his money and even got a refund from her family in Port-Harcourt when she packed out of his house and refused to be his wife again.
Confusion lingers as Tonto stays back in Dubai to clear her name in the court and get her passport back.
Her passport back?
“Yes, the current passport is with the Dubai police. Tonto Dikeh still has an ongoing case in court and would not return to Nigeria for sometimes. The passport she showed off on Instagram to spite blogger, Stella Dimoko-Korkus, who broke the story of her arrest, was her old passport.
Now that she has been in Dubai for over five weeks and the innocent boy left with a nanny in Abuja, what should her family and that of her ex hubby do?”

“Even if the father wants to take the child to her in Dubai, where is the child’s passport? Already, it has been deposited in a bank agreed on by the couple as instructed by the court. He can’t even withdraw it alone!,” sources said.

Tonto, who has tried to liven up herself in Dubai, is an old image of herself. She not only has lost weight, she was complaining in an Instastory that she wants her fats back. She wrote that she is losing weight.

Now trying to be part of a female football group in Dubai, with the help of her current male friend over there, its obvious Tonto is stuck in that country!

“She caused it. Tonto is too temperamental whenever she is high. The concern now is how to get her son from that nanny in Abuja because she could run short of money and food for herself and King Andre. What if she runs away and leaves the boy alone?” sources said.
Kemiashefonlovehaven gathered exclusively that Tonto’s ex husband, Churchill is heading for the court again.

“Churchill is going back to court over the custody of the child since Tonto is stuck in Dubai. He is angry that she has been taking money for the son’s upkeep and refused to comply with the court rules and order. In fact, he has taken another step and decided to open a trust fund account for his son. This way, the money would be judiciously spent on the child,” source said.

Here are excerpts from court papers of the custody battle in 2017, 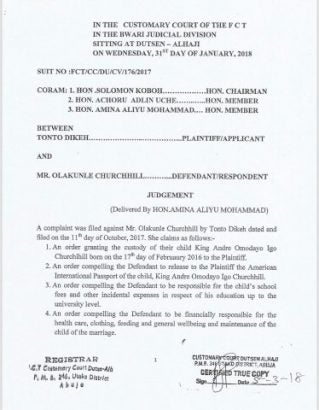 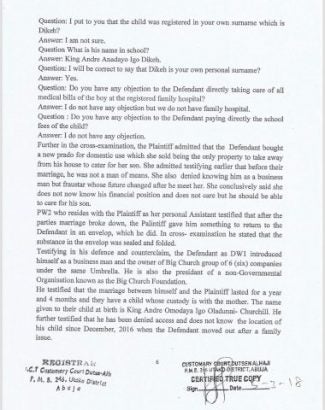 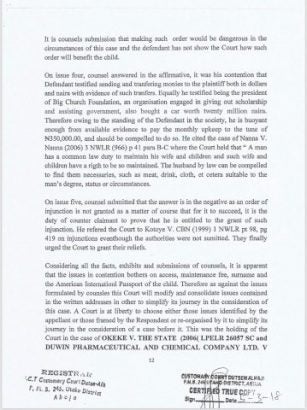 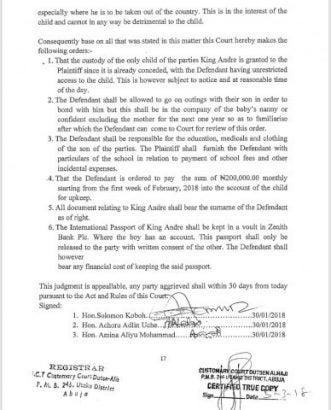 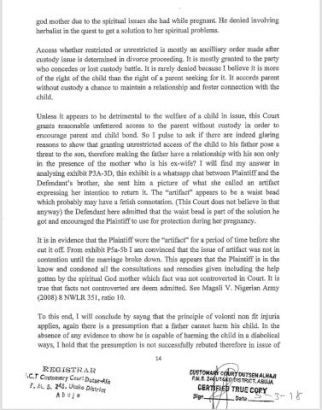 Marriage Crisis: Oluwo of Iwoland places curses on those judging him wrongly