Prophecy thief: Pastor accuses another pastor of copying his 2020 prophecy

We all know it’s that time of the year where different men of God come up with prophecies for the new year and it seems to have become a competition where everyone wants to go viral through the words of their prophecies. To make it more interesting, the projections of war from different Nigerian clergymen seem to be happening so fast as tension continues to build up between Iran and US.

In a hilarious turn of events, two pastors were reportedly at loggerheads over one stealing the prophecy of the other.  A Twitter user, Theresa, has blown hot steam on what she describes as ‘prophetic plagiarism.’

Sharing the gist on her Twitter account, she hinted to her followers that a ‘Man of God’ is accusing another ‘Man of God’ of copying his 2020 prophecies. 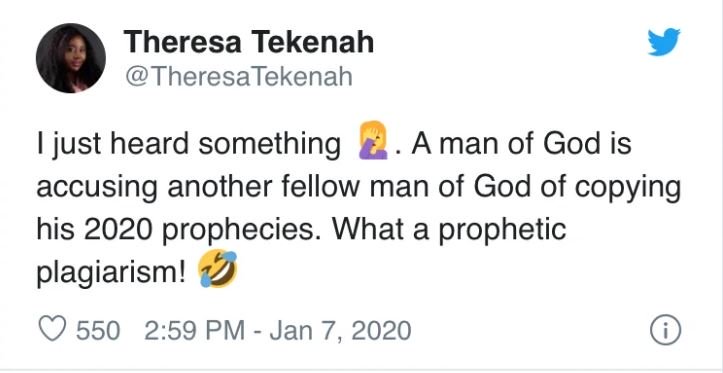