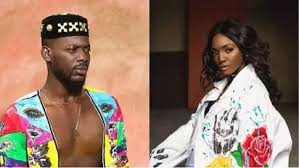 In a new revelation on Twitter, Nigerian singer, Simi, has stated her reasons for keeping her relationship with her hubby, Adekunle Gold, private prior to when they officially tied the knot.

Simi and her heartrob, Adekunle Gold tied the knot few months over a year ago after they exchanged marital vows at a private ceremony in Lagos. The ceremony was attended by a few close friends, family and allies.

Many fans were taken by surprise when their wedding photos hit the internet as the couple never displayed any sort of PDA on social media.

In a new tweet on Wednesday, Simi has now mentioned her reasons stating that she didn’t want people to know she was in love with someone called Adekunle. “Lol Happy place? Where? I was over it. I wrote like 4 songs on the beat before I wrote Joromi. I was actually going to use “Dekunle Dekunle – I want you to love me” – but I already had “Take Me back” and I didn’t wanna sound like I liked somebody called Kunle that much.” Simi wrote.

Meek Mill is set to buy a Mansion in Africa