A Nigerian man named Uzor Obinna Marvelous, who got married in January this year, said it is “wrong and ungodly” for Christian couples to moan during sex. 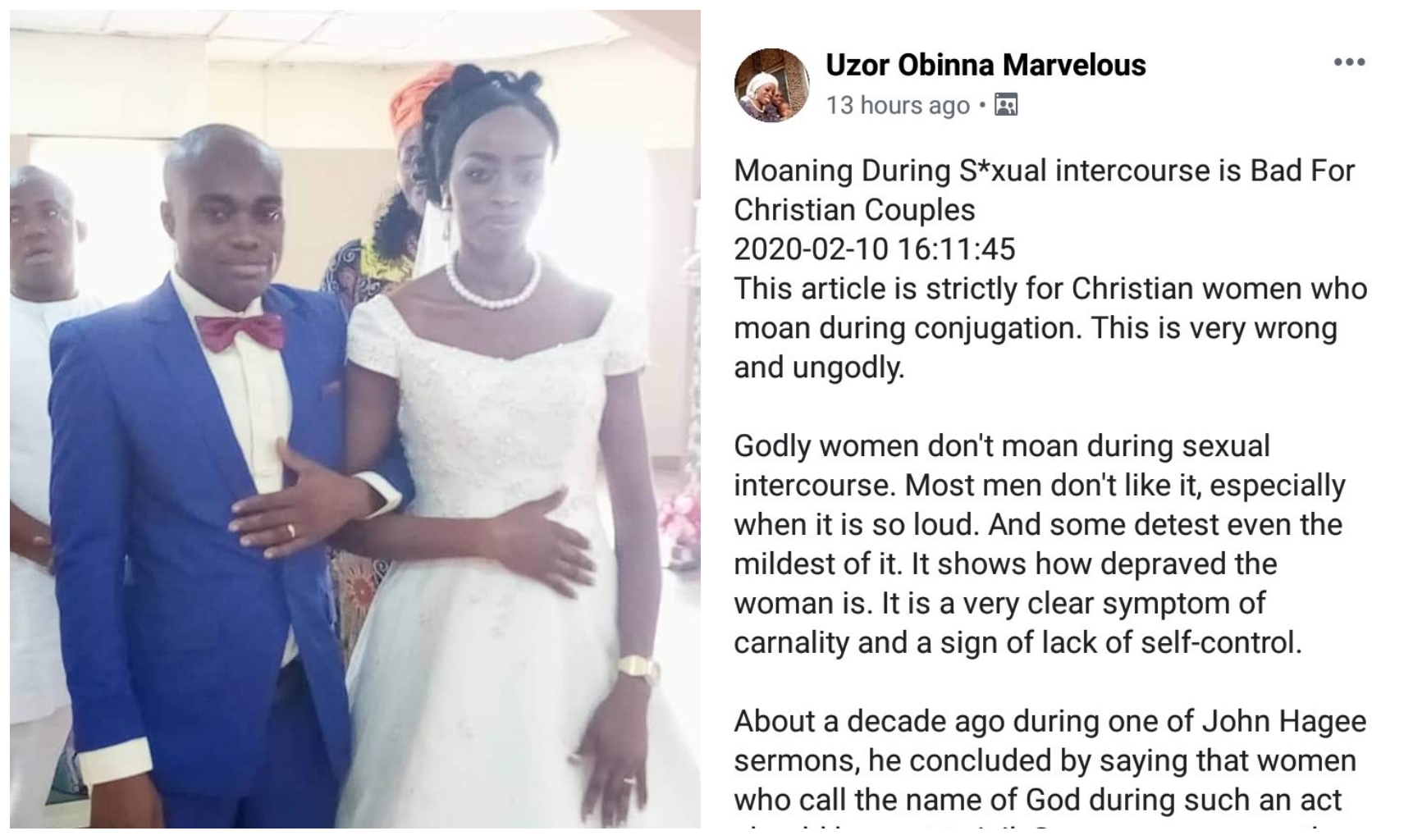 He said men do not like it when women do it. He added that moaning shows how “depraved” a woman is. As for the men who moan, he said it’s a sign they’ve been visiting sex workers.

He added that any woman who calls the name of God or Jesus during sex or speaks in tongues should be sent to jail.

He went ahead to say that when his new wife moaned during sex, he took her for deliverance from “the spirit of lust and moaning”. Now, whenever she gets the urge to moan, she hums hymns instead.

Moaning During S*xual intercourse is Bad For Christian Couples.
This article is strictly for Christian women who moan during conjugation. This is very wrong and ungodly.

Godly women don’t moan during sexual intercourse. Most men don’t like it, especially when it is so loud. And some detest even the mildest of it. It shows how depraved the woman is. It is a very clear symptom of carnality and a sign of lack of self-control.

About a decade ago during one of John Hagee sermons, he concluded by saying that women who call the name of God during such an act should be sent to jail. Some even scream the name of Jesus and speak in tongues. Too bad.

I heard of a story about how a woman and her granddaughter spent the first wedding night with a newly married couple. The screaming was so loud and disgusting in the dead of the night.

The little girl of seven woke up and asked grandma why aunty was crying and making so much noise. The grandma was very polite with her response. “They are making babies,” she told her and asked her to go back to sleep.

The first time my wife did that I was shocked. I had to take her for deliverance from the spirit of lust and moaning. Since then she reduced the tempo of the moaning but hummed hymns silently. Amazing Grace is her favourite.

There was another scenario that happened where I lived about 2 years ago at Ajegunle. This couple had five children.

The midnight moaning usually starts with a loud shout in Ibibio language. Then singing follows almost immediately. The next thing you will hear is the man thick baritone voice shouting What! in English.

She will then reply with curses and the man will be replying Amen. She will be raining curses on whoever will take away honey from her mouth.

What honey my brethren? It got to a point that the landlord had to intervene. He had been awake from 2 am to 4 am. The weather was very hot too and the mosquitoes had a party.

The old man knocked their door in their one-room apartment and there was silence. Then the man appears in wrapper and topless with heavy sweat drops cascading his face and chest.

They both stared at each other for a while before the old man broke the silence. He pleaded that the man should get another apartment before the end of the month that his house is not a brothel. How can a woman with five children be behaving like that?

The remaining tenants threatened to call in the police any time this couple keeps them awake at night.

They had to induce their children with drugs so that they will not know what was happening in the night.

Men don’t moan. Even when they woman is at the top you cannot hear it. Any man who moans loudly must have been visiting prostitutes who taught him. It is sinful for men to moan during sexual activities. It’s a sign of weakness and carnality.

Secondly, is the quality of babies that would be produced. They will be normal children and endowed with high intelligent quotient (IQ).she said and I almost cursed her that women who don’t moan give birth to imbeciles. What arrant nonsense. In a sane society, she ought to be arrested.

This goes to show how carnal and depraved some Christians can be. Report your spouse to your pastor for prayers if he or she moans during s*xual intercourse……To Be Continue
#AdminUzor.

The 5 most severe sexually transmitted diseases (STDs) in Nigeria – No. 4 causes worse effects than AIDS

10 real signs you are not the only one she is sleeping with – Guys, run away if you notice #10

LADIES!! 5 reasons why you have painful penetration during s*x – See a doctor if you notice #2 & #5

Here are 5 questions to test the strength of your relationship