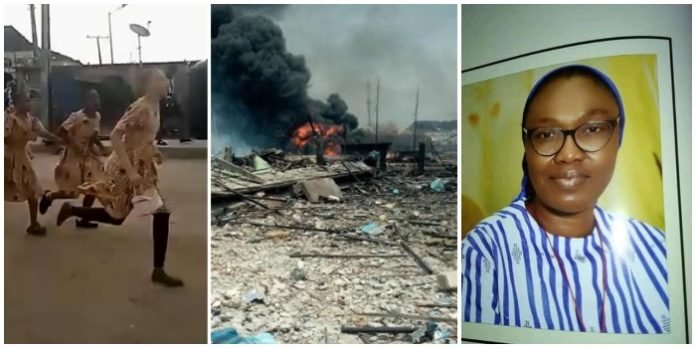 The principal of Bethlehem Girls College, one of the sites heavily affected after the Abule Odo explosion that happened Sunday morning, Henrietta Alokha and three other reportedly dead

Henrrieta Alorkha,  was also a Reverend sister, and the other two, an engineer was identified as Ose, but the security man was yet to be identified as at the time of this report.

We gathered that the corpses of the deceased were deposited at the Naval Reference Hospital in Ojo area of Lagos by the archdiocese of Lagos.

“We don’t know his name but we know that he was a security man with the school,” a source at the mortuary told SaharaReporters.

Earlier reports have it that a Catholic priest who was saving students from the inferno caused by the explosion was also among the death list pegged at 17 people.

At the Naval Reference Hospital where the corpses of the principal and other staff were deposited, at least seven people were also seen receiving treatment with various degrees of injuries.

A source at the hospital’s mortuary, who spoke with SaharaReporters, also said some corpses were taken to other hospitals.

He said the corpse of a child was brought into the naval mortuary but it was later taken elsewhere.

…..Schoolgirls evacuated from hostel. A boarding school identified as Bethlehem Girls College was also affected by the pipeline explosion which rocked Abule-Ado community in the early hours of today. Inside the videos uploaded on internet, some students of the school, Bethlehem Girls College can been being evacuated from the scene of the explosion. As at the time of filing this report, the casualty figure of the incident and many properties destroyed are still unknown.