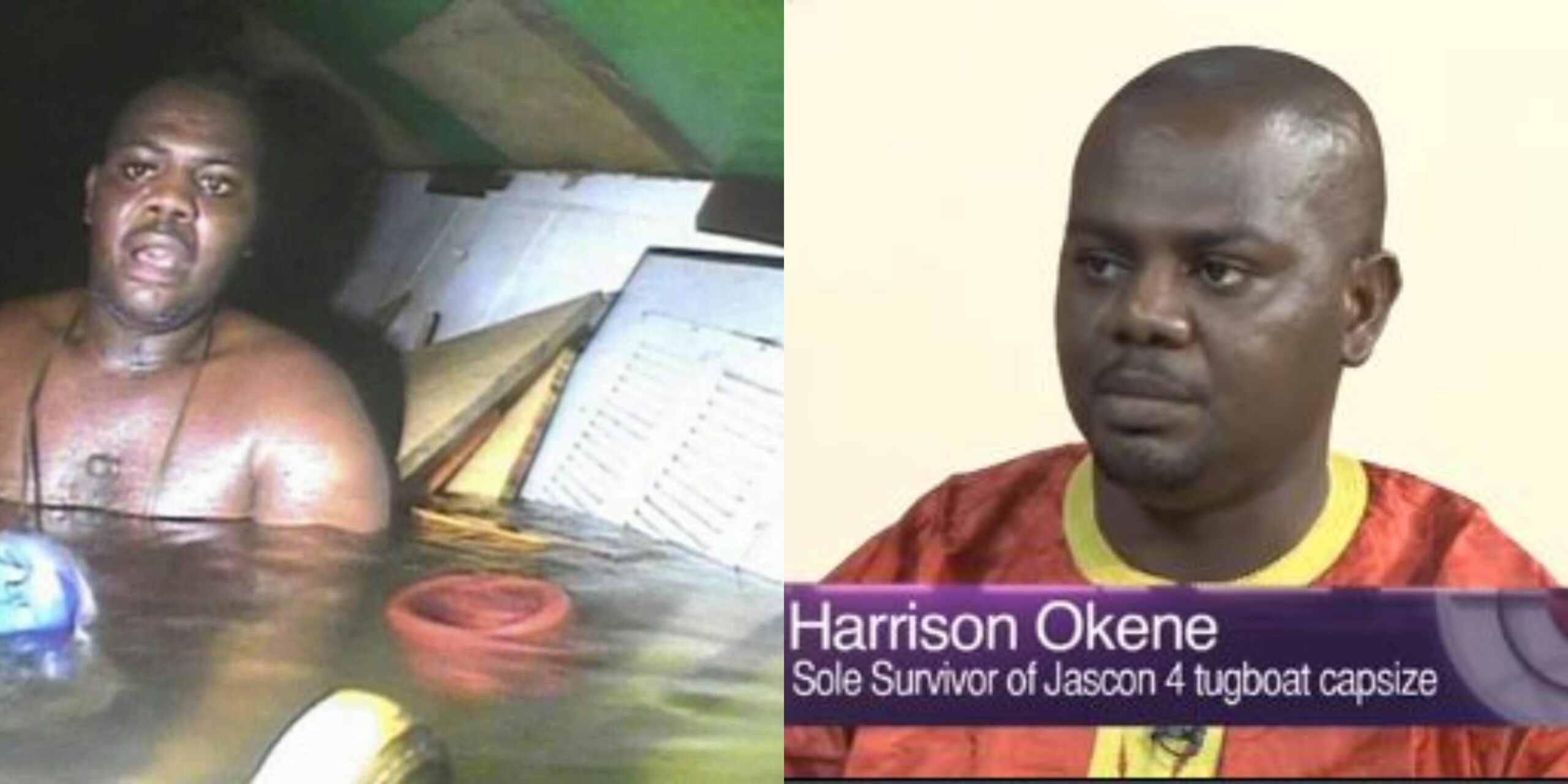 Nigerian sailor, Harrison Okene remained in 3ft air bubble within upturned tugboat at 900ft deep in the ocean, experts say would be fatal for even experienced divers.

A story of a Nigerian cook who survived in a sunken ship and was rescued by divers made the rounds 7years ago and TheInfoNG is bringing back this miraculous story to instill hope in Nigerians even at these perilous times.

Harrison Okene, a 36-year-old cook, was the sole survivor of the Jacson-4, which overturned after being battered by heavy swells in 2013. Eleven other crew members died as the vessel sank some 12 miles (20 km) off Nigeria’s mangrove-lined coast.

In an interview with popular Nigerian pastor, Wale Adefarasin, Harrison gave in-depth details of how he spent 3days, 900ft deep in the ocean.

“It was around 5am and I was in the toilet when the vessel just started going down – the speed was so, so fast,” Okene said, he was unable to reach an emergency exit hatch and watched in horror as three crew members were sucked into the churning sea.

The water swept him into another toilet as the boat plunged 30 metres into the freezing depths. Wearing only his underpants, Okene prayed as water seeped slowly but steadily into a 3ft sq air bubble in the cabin.

“All around me was just black, and noisy. I was crying and calling on Jesus to rescue me, I prayed so hard. I was so hungry and thirsty and cold and I was just praying to see some kind of light.”

He had been underwater for almost 60 hours when he heard a hammering on the deck. A team of South African divers scouring the waters on a presumed body recovery operations were shocked to hear faint hammering in reply.

As a diver’s light approached, Okene hesitated to swim outside the air pocket in case the startled diver might use a jack-knife on him. “I went to the water and touched the diver. He himself shivered from fear. So I stepped back and just held my hand in the waters and waved it in front of his camera so they would see the images above deck.”

“The diver walked in and at the back there was an air pocket he was sitting in,” Paul MacDonald, an officer on the support vessel wrote on Facebook. “How it wasn’t full of water is anyone’s guess. I would say someone was looking after him.”

Once Harrison had been located, there were worries he would panic during the rescue, while his body had absorbed potentially fatal amounts of nitrogen. “His heart wouldn’t have been able to pump [back on land] because it was just so full of gas,” said Christine Cridge, medical director of the Plymouth-based Diving Diseases Research Centre , who advised the rescue team.

Okene was strapped into diving equipment, then led to a diving bell which took him to the surface, where he spent two days in a decompression chamber. “To survive that long at that depth is phenomenal. Normally you would dive recreationally for no more than 20 minutes at those depths,” said a training consultant from the Professional Association of Diving Instructors.

Okene said, “They told me all the others had died and I cried because I thought I was the only one who had been trapped in the boat”, his voice cracking. Despite suffering from nightmares and peeling skin, daily helpings of his favourite banga soup dish – a fish and palm fruit soup – have helped him feel much better, he said. He is planning to write a book on his experience.

Lock down, lock down the least you can do is credit everyone’s account – Toke Makinwa fires