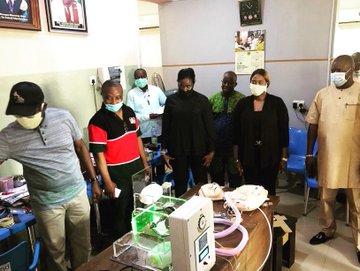 TheInfong reports that a team with the Ogun State Government visited the Federal Polytechnic, Ilaro for an assessment of a mechanical ventilator constructed by the tertiary institution of learning.

The team which was led by the Secretary to the State Government (SSG), Tokunbo Talabi and the State Commissioner for Health, Dr Tomi Coker, commended the initiative, especially its quality and outlook.

The Rector, Arc. O.O. Aluko, who said he set up just about a week ago the team that fabricated the ventilator, disclosed that the equipment was constructed within seven days.

The SSG recommended areas for improvement on the equipment, while urging the Rector to notify the State Government on possible areas for assistance towards perfecting the eventual condition of the ventilator.