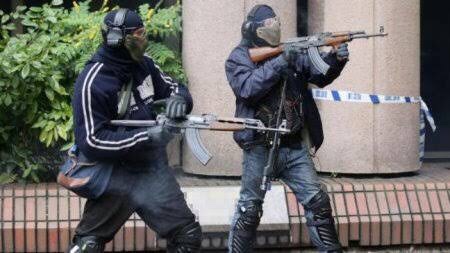 There’s been Series of armed robbery attacks going on for days now in some areas of Ogun state, Nigeria.

Multiple reports of Armed robberies within the environs of Sango Otta, Owode, Ifo, Agbado Ijaiye and so on and no one seems perturbed…

This series of coordinated attacks on residents of Ogun state has become worrisome and the people have created a hashtag on social media named #OgunUnrest.

According to reports from eye witness, armed robbers appear to have dislodged many citizens, killed a few and carted away properties worth millions.

“Everybody is awake. The men are carrying machetes, cutlasses, creating bonfires, chanting, blowing whistle all through the night just to, at least, go through the night alive and well.” A resident of Adalemo, Ado-Odo/Ota Local Government Area told TheInfoNG.

Another source revealed that the robberies started few days after Ogun state joined the imposed lockdown mandated by President Buhari on 29th March 2020. The source who pleaded for anonymity said head of households and men in the communities keep vigils all night in order to stay alert and get ready for any attacks

“They announced something that i don’t think is wise, Guys should come out of their house by 12” A resident at Sango area of the state says.

“People from the force are around due to the lockdown but if they need to get police, It would be the community”. She said

Residents of Giwa, Oke Aro, Agbado areas of Ogun State had a frantic night last night in fresh attacks from the hoodlums who seem to have become formidable in the last few days.

“There are robbers on our street, but we are all awake, they’re heavily armed and everyone is scampering for their lives” A university student stuck at home during the lockdown told TheInfoNG

As at Press time, we have contacted the Ogun State police public relations and yet to get a reply. The residents of Ogun have pleaded with the Governor, Dapo Abiodun to come to their rescues as lives and properties within the state are in severe danger in the face of lockdown.

BUSTED! Davido is such an attention seeker -He knew the artist that drew his family portrait all along