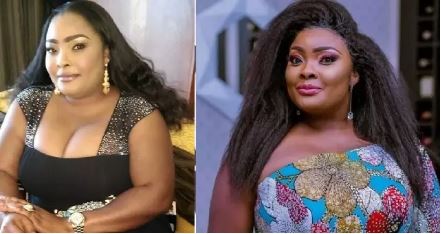 In no particular order;

Foluke Daramola is obviously one actress that is blessed with excess boobies. The 41 year old who is now married, but she was the talk of the town when she first got into acting. People couldn’t get enough of her big frontside. Also known as Flakky Ididowo, is well endowed both in front and behind. This is a feature that earned her the movie role Flakky Ididowo in a movie titled as same. Ronke has learnt to carry her natural endowment with so much charisma and courage. Popular Yoruba actress, Ronke Oshodi Oke is not the type to shy away from talks about her frontside or adult talk. She once said during an interview that, ” Before now, I get ashamed of them. But I later began to see the beautiful side and stopped hiding them because they fit me. People appreciate my oranges and I also love it.