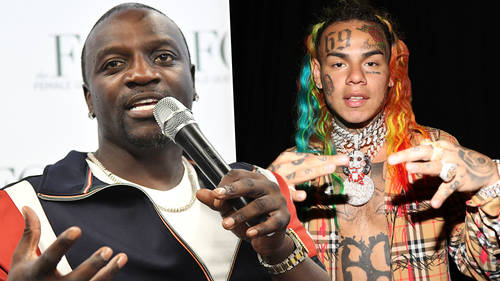 Although, Akon and 6ix9ine style and genre of music are different, however, the American songster has accepted 6ix9ine challenge to go hit-for-hit with him in an Instagram live battle.

While many believe 6ix9ine could only have been trolling Akon and that the Instagram live battle may never happen, others are hoping it happens just to get entertained.

Akon in a statement on Saturday via his Instagram story revealed to his followers that he had been challenged to a hit battle by Tekashi 6ix9ine.

Akon is the first artist to collaborate with controversial…

“@6ix9ine just challenged me to a battle tomorrow at 3:30pm Live on IG,” Akon wrote on a screenshot of himself and 6ix9ine on Facetime. “IT’S ON.”

Following 6ix9ine’s comeback, Akon has been taking sides with him.

It is unlikely that the battle will take place as 6ix9ine’s has since deleted the Instagram story announcing the battle.

You are doing well – Gov. Akeredolu to Teni