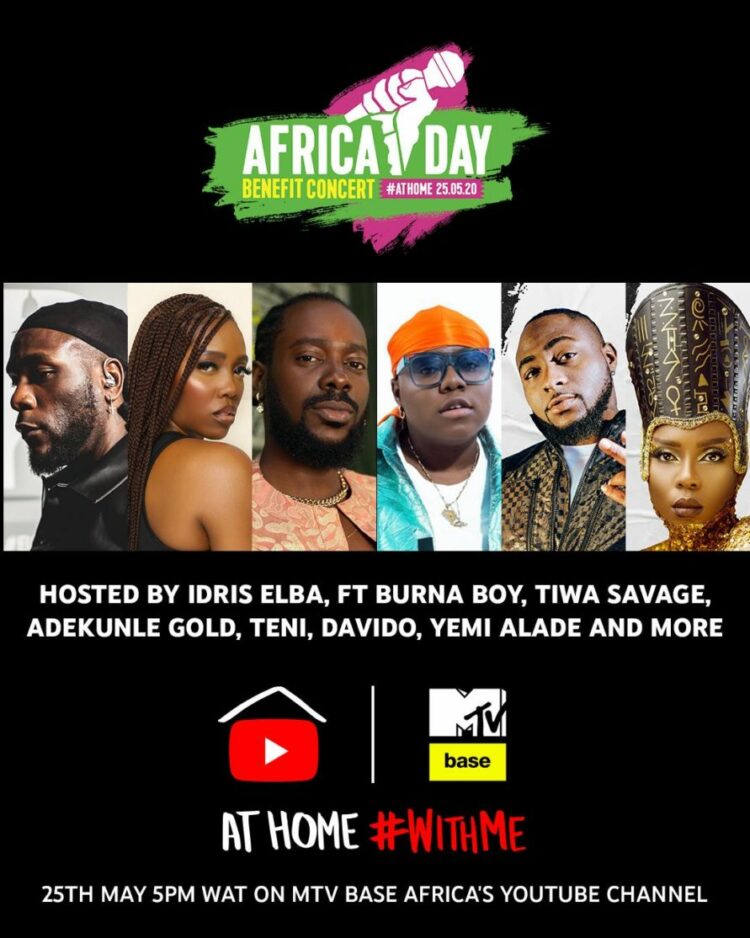 The concert will be streamed on the MTV Base Africa YouTube channel on Monday, May 25 at 18:00 CAT and broadcast on the network’s TV channels in Africa at 21:00 CAT.

The two-hour special will raise funds to support food and health needs for children and families in Africa affected by the COVID-19 pandemic, through the World Food Programme and UNICEF.

World Food Programme Regional Director for Southern Africa, Lola Castro, said, “With so many people on the continent already acutely food insecure, we are extremely concerned about the prospect of COVID-19 causing a hunger catastrophe.”

“The COVID-19 pandemic has affected the lives of many and disrupted economic activity, increasing the threat to food security and children’s survival and wellbeing. UNICEF and the UN World Food Programme are working together to save lives and support millions of people, the bulk of whom live on the African continent. All funds raised from the concert will be donated to their work to support COVID-affected communities in Africa.

On his part, YouTube Managing director of Emerging Markets in Europe, the Middle East and Africa, Alex Okosi, said, “African music is powerful in its ability to uplift and connect the world. YouTube is proud to be a platform for the amazing talent that has come together to celebrate Africa Day and play a role in helping to raise funds for those affected by COVID-19 on the continent.”

“We are proud to have formidable partners and talent on board as we tackle this unprecedented humanitarian crisis. ViacomCBS Networks Africa is proud to work alongside YouTube to support the World Food Programme and UNICEF in their efforts,” comments Monde Twala, Senior Vice President and General Manager for ViacomCBS Networks.

The benefit concert will be made available after Africa Day to continue encouragement for organisations and individuals to contribute towards fundraising through the World Food Programme and UNICEF campaign website uni.cf/Africa.