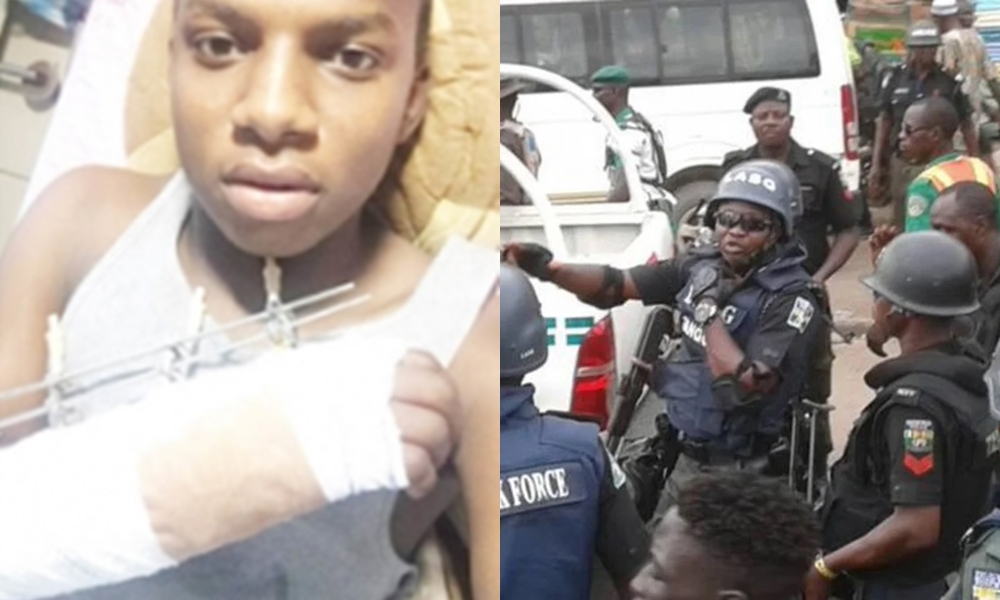 A Nigerian man identified as Sadiq Abubakar Ibrahim, escapes death after a Nigerian police officer who shot him on his hand, allegedly told him he aimed at his head but missed it.

On May 18, Sadiq, a teenage son of Engr Abubakar Yaro Ibrahim, a former Sole Administrator of the National Iron Mining Company, Itakpe, was allegedly shot in the hand by an operative of the police force with Special Tactical Squad (STS) of the Office of the Inspector General of Police (IGP).

According to Daily Trust, The unidentified police officer allegedly told the semi-conscious Sadiq to count himself lucky that the bullet missed him on the head where it was targeted.

Photos of Police officers robbing ex-corp members of their…

“He is getting better. But he is still in the hospital. Two surgeons – a plastic surgeon and an orthopaedic, operated on him for almost eight hours” Engr Ibrahim revealed.

Engr. Ibrahim, who is currently a visiting lecturer at the Ahmadu Bello University, said his son, a student of School of Basic & Remedial Studies (ABU) Funtua, was shot in his right hand. “They cracked one of the bones around his wrist,” he added.

Ibrahim, narrated the incidents leading to the shooting of his son.

He said on the day of the incident, he was preparing to join other members of his family to perform the afternoon prayer (Salatul Zuhr) at about 12.45pm, when the personnel of the STS, who he initially thought were armed robbers, stormed his house.

“I heard several gunshots, and some strange people shouting at the top of their voices at members of my family, while some other people were banging doors, trying to forcibly gain entrance into the house through other doors.

“I rushed downstairs to the main living room of the house to know exactly what was happening and to my greatest dismay I found members of my family laying down on the floor of the living room with their faces down and several armed men were standing keeping watch over them, threatening to shoot anyone that may attempt to run away.”

“They did not enter my house through the main door, in spite of the fact that it was not locked. They instead jumped over the fence between my house and that of my immediate next-door neighbour.

“My son, Sadiq, was performing ablution when they entered the home by jumping over the fence between my house and that of my neighbour; this very manner of entering the house greatly frightened him.