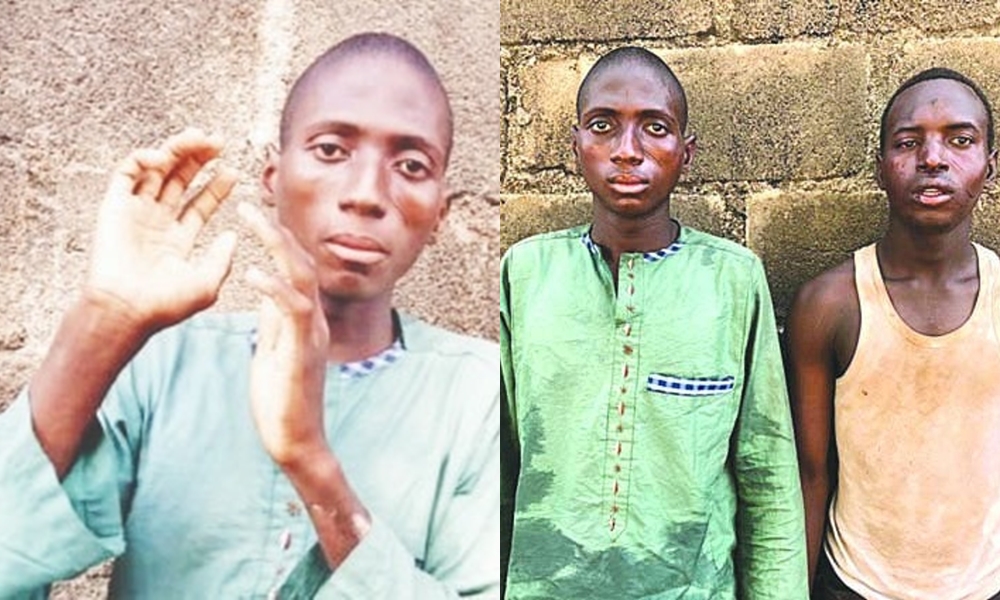 The man was said to have allegedly masterminded an armed robbery which led to the death of his elder brother identified as Kadade Abdullahi of Amana MaiKasuwa Village in Igabi Local Government Area of Kaduna state.

Newsmen learned that Ibrahim Abdullahi who was arrested alongside one Hassan Amadu reportedly contracted a five-man gang of armed robbers identified as Auwalu, Kiri Jumare, Nakaduwa, Yellow and Amadu to rob and kill his brother because he was enjoying more favors from his father who is a cattle trader.

Three months after the robbery and killing of his brother, the suspect met his waterloo when operatives of the IRT led by Deputy Commissioner of Police, Abba Kyari attached to the operation Puff Adder in Kateri area of Kaduna State got information about Abudulahi’s activities and one of his gang members, Amadu.

In a series of investigations, Abdullahi confessed that he organized the killing of his elder brother.

Narrating the tragic incident, the suspect joined the cattle rustling gang which later grew into an armed robbery and kidnapping gang terrorizing residents of Kaduna and Zaria.

He said; “My father married four wives and had so many children. I don’t know what was so special about Kadade that my father would prefer him to his other children. I was never sent to regular school but Arabic school in Kaduna. It was only Kadade who attended primary and secondary school. My father said he wanted all of us to be farmers, yet he kept calling us illiterates that cannot speak English.

“How can I speak English when my father did not send me to school? I learnt how to cultivate corn and rear cow. I had to get married to convince him that I was old enough to handle responsibilities. As soon as I got married, my father gave me only 20 cows and two plots of land.

“It was Adamu, a farmer who introduced me to robbery and kidnapping. I met him in the bush while I was rearing cows and he asked me to join him which I did. We started by stealing rams, goats and sheep and as we were able to secure enough AK47 rifles, we started rustling cows. He also introduced me to one Abdulahi who lived in the forest and gave us information on rich people we could kidnap after which he would get his own share. I never kept the stolen cows because my father would notice and accuse me of stealing.

Any cow that we stole would be kept in the bush and sold later. Most of the people that we kidnapped were Fulani cattle rearers who were known to us. We would kidnap them and ask them to bring the money they realized from the sale of their cows. It was only a few times that we entered the Kaduna-Zaria express road to stop motorists, we avoided that area because there were so many stronger gangs in charge of those areas who sometimes invited us to join them if they needed more hands.

My brother sold some cows and made N1.7million. It was a good deal that he came back and was making noise about it. My father was also very happy about it and asked him to keep the entire money. We expected him to share the money but he asked him to take it to the bank the next day. That day I was so broke and asked my father for money. He started insulting me and asked me to learn to be responsible like Kadade.

I was so bitter and I immediately called a member of our gang, Haruna and told him about the money in my house. I asked them to come that night and also make sure that they kill my brother. Although I now regret my action but I thought that his death would make my father allow me to control some of his businesses. At about midnight that day, about five of them came. They knocked on my window to let me know that they were around. They searched everywhere including my room and before they left, they killed my brother as I instructed them.

Initially, police came and arrested our neighbors because they also heard about the money made from the sale of cows. They were later released and my brother was buried while the matter was forgotten. I was surprised when police came back weeks later with Hassan and arrested me. I am terribly sorry and hope that my family would forgive me.”

A 22-year-old accomplice identified as Hassan who is a native of Rinji village in Igabi local government area of Kaduna state also narrated how he got involved in the incident.

Hassan said: “My father sent me out of the house when I was 15 years old to go and learn how to rear cows from one Alhaji Sani. Although my father was also a farmer, he preferred to send me out because he had so many sons. The agreement was that at the end of each year, the man that I was serving would give me a small cow. I was expected to continue like this until I got enough before leaving to start my own business.

I met Haruna in the bush and he gave me an idea on how to make my own money. He told me that Alhaji Sani, who was my boss, was very rich and had so many cows and that he would not notice if one cow was missing. I started like that by leaving one cow behind every month whenever I took them out for feeding. Haruna would then come back later to take the cow and sell. This worked for me until Alhaji Sani discovered that his cows were missing and sent most of us away.

“When I told Haruna my plight, he asked me to come and start working for him. This was how we started stealing cows and gradually Haruna introduced us to robbery and kidnapping. Ibrahim was part of us and normally anyone could bring information about where we could steal from or those we could kidnap. That was why he told us that there was money in their house. I never knew that he asked Haruna to ensure that Kadade was killed.

We all lived around the same village, so I knew Kadade very well as a hardworking man and very generous. I would never wish him dead. On the day of the incident, I was busy searching the other rooms for money when I heard a gunshot. I thought it was just to scare them and warn us to prepare to move out. It was in the bush that I learnt that Kadade was killed. We only found N300,000 in the house and my share was N40,000.”