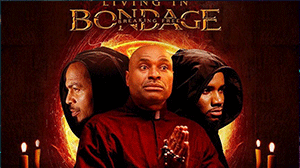 ‘Living in Bondage: Breaking Free’ is a 1992/93 Nigerian two-part drama thriller film directed by Chris Obi Rapu, written by Kenneth Nnebue and Okechukwu Ogunjiofor, produced by Ogunjiofor, and sponsored by Jafac Wine. The film was shot straight-to-video and starred Kenneth Okonkwo and Nnenna Nwabueze in their breakout roles.

In August 2015, Charles Okpaleke acquired the rights to Living in Bondage for a period of ten years under his production company Play Entertainment Network. On November 2, the highly anticipated sequel, Living in Bondage: Breaking Free, premiered in Lagos

Play Network’s ‘Living in Bondage’ sequel will make its grand entrance on the popular streaming platform, Netflix from May 22 as confirmed by Filmore.

The 2019 blockbuster joins four other Nollywood titles coming to the giant streaming platform this May including ‘Anchor Baby’, ‘ The Delivery Boy’ which is currently streaming and ‘ Light in the Dark’.

‘Living in Bondage: Breaking Free’ follows the story of Nnamdi Okeke, Andy Okeke‘s son, and his desire and pursuit for wealth. It stars Ramsey Nouah who doubles as the movie’s director, JideKene Achufusi, Kenneth Okonkwo, Muna Abi, Shawn Faqua among others.

Stay updated! How Scammers now use Date of Birth as their new format of lies