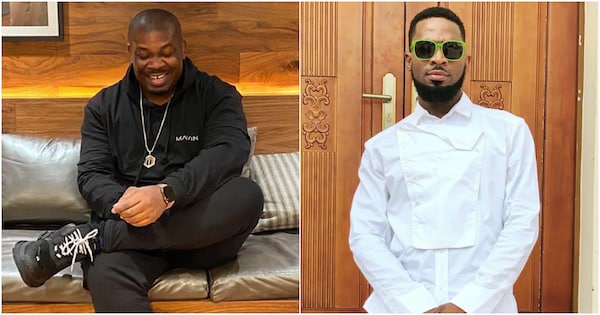 Top rated producer and Marvin Record label boss, Don Jazzy in a recent statement spoke about his relationship with Dbanj while they ran Mo’Hits record.

According to Don Jazzy, he stated that he never had money issues with the Mobolowon crooner.

The Nation reported that the Mavins record CEO stated that he enjoyed an uncommon relationship with D’Banj while they were together.

Moment Davido and D’banj arrived at Oba for Obi…

“The way I am with people in my company like myself and D’banj, money issues didn’t occur. I and D’Banj were so in sync that D’Banj can go to Oba of Lagos and return with N10 million and we would still share that money,” he said, noting that the money does not even have to come from a performance.

Don Jazzy made this statement while advising record owners to have a relationship with their artistes so that they do not go behind them to collect shows.

“Bond with your artist more, it’s not everything that contract can solve but it is good to have a structure in place so that if by any chance things get out of hand you can step in and the contract can be what you guys can use to solve your problem but I try to make sure that it doesn’t get to that.”

He stated that he doesn’t treat his artistes any lesser than he treats himself. According to him, there is trust between him and all his artistes.