Nollywood actress, Anita Joseph has had a fair share of internet bullying for a while now and she seems to have hit a point of saturation. The newlywed took to her Instagram page in a four minutes long video to warn trolls who have made it a habit to always bash her for every of her act.

The mother of one pointed out that the point of her being a celebrity does not give anyone the leverage to always talk her down as she is human too whose thick skin can take as much. She has now declared war on anyone who brings up any tantrums on her social media pages.

With her husband, MC Fish sitting next to her in the video, the actress sent out a strong warning to trolls to stop insulting her man. 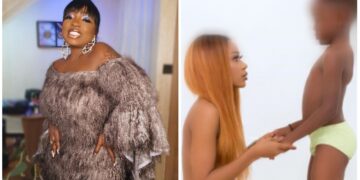